Still early days but here's an appetizer from the Stags 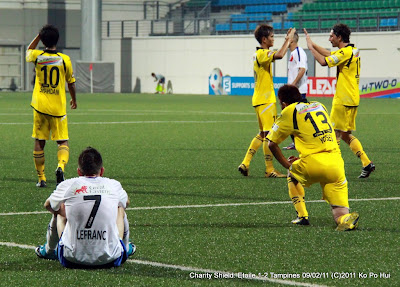 Locals' pride was salvaged in the last 10 minutes of the game as Tampines Rovers came from behind to snatch a dramatic 2-1 win over the recently-revamped defending champions Etoile FC in the season opener - The Charity Shield at the Jalan Besar Stadium.

Things didn't start off too pretty for the Stags as they found themselves with a goal down from a spot-kick from Etoile in less than 20 minutes.

And things just don't looked good when Tampines found themselves struggled upfront with lone striker Aleksandar Duric being deprived the service of Ahmad Latiff Khamaruddin as the ace midfielder was replaced in the 43rd minute due to a slight knock on his left knee.

While due the lack of acclimatization for the defending champions prior this match, it wasn't hard to see the sign of fatigue being reflected on the face of the French as the match progressed.

"The team was formed barely 15 days ago and coupled the fact that we just flew in from France, therefore we just lack the physique to play in this kind of climate." reasoned Etoile's new coach Guglielmo Arena after the match. 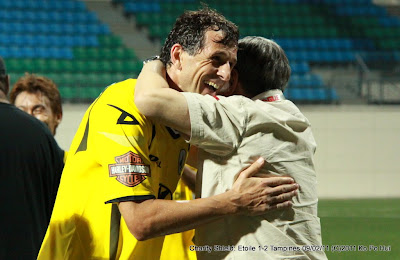 With that advantage, Tampines fought right to the end to seal the win in front of the crowd of 2252 with goals from skipper Duric (pictured above embraced chairman Teo Hock Seng after the match) and Korean import Park Yo Seb in dying moments of the match.

"We can see that the sign of fatigue on the Etoile players whenever they went to get a drink whenever the ball went out of play.

And when they (Etoile) started played a compact game in the second half, that's why I put Jamil Ali who is capable in the one-on-one situation to place pressure on them." said Steven Tan, Stags coach after the win. 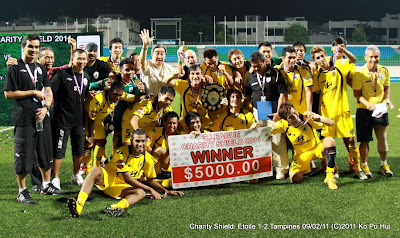 With this victory over the French tonight, the eastern giants finally claimed their first win after four meet-up between the two.

But then again, it's still early days just yet...