It wasn't really a good game for...

me, as a photographer shooting match pictures at a sunset timing of 5pm, at least (the constant need to adjust the setting according to the lighting was so taxing). 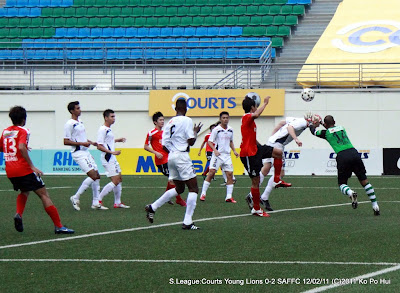 Honestly speaking, based on where I MUST be positioned (close to the corner flag) during the opening match of this new season, I think I'm not in the right position to pass any rating of this game between Courts Young Lions and SAFFC.

Some of the feedback I gathered after the game went like these, "Quite a poor game, huh?" commented one of them, "Warriors couldn't match the cubs (Young Lions) pace at times and defence is a suspect this year with or without Daniel Bennett (who was suspended for this opener)."

On the contrary, SAFFC's coach Richard Bok felt otherwise as he lauded his defenders' performance after saw his team clinched the victory over their hosts. 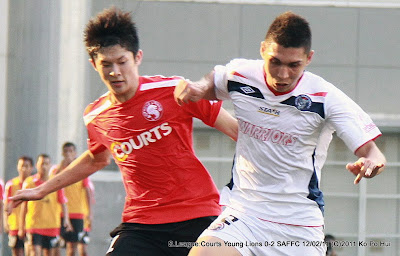 "After last year's disappointment, we decided to strengthen our back line by signing guys like Bah Mamadou and Daniel Hammond, and having Shaiful Eash (pictured above right in tussle with Young Lions' Eugene Luo) back (after a lengthy injury) will mean a happy headache for me once Bennett is available."said coach Bok in the post-match press conference. 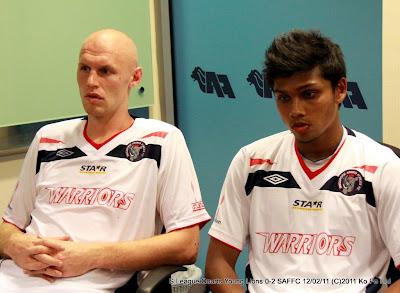 (Pictured above L-R): Daniel Hammond and Fazrul Nawas joined SAFFC this season
Not just the area of defence was strengthen, coach Bok insisted the attacking department and the team in a whole as well when he explained why ex-Bulls striker Fazrul Nawaz, who scored the first goal in the 25th minute, was picked ahead of Indra Sahdan Daud. 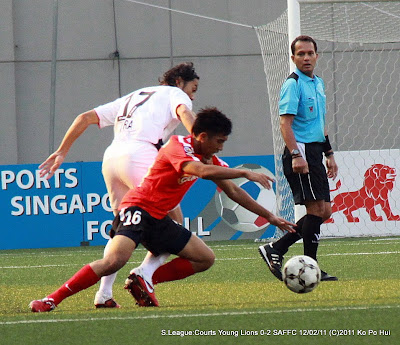 "Fazrul is enjoying a good form that I decided to start him ahead of Indra (pictured above in white jersey), while the decision to start Ivan (Jerkovic) on the bench is because he just recovered from a groin injury."

"Overall, it was a decent performance from my team and credit to the Young Lions for putting up a tough fight against us in this hot weather." he concluded his assessment.

While the climate never seems to be a factor to Robin Chitrakar, the Courts Young Lions coach after his first S.League game in charge.

"I thought the weather was perfect." said the first Young Player of the Year recipient back in 1996 when asked by the media if the heat is a contributing factor to their opening defeat at home. 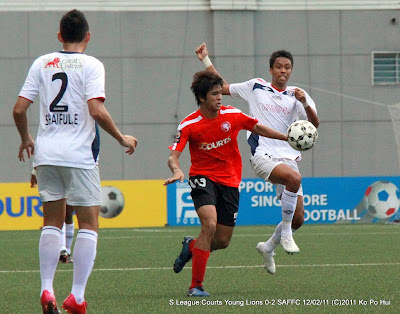 "It's good learning experience for these boys playing against a team like SAFFC, after a tough pre-season preparation with some of them need to play for their schools, days before today's game." said the 35 year-old coach.

"I think we did well to complete against them (SAFFC) and could have match them if we had more self-belief especially in the final-third (of the field), while I felt a draw would have been a fairer result." he said. 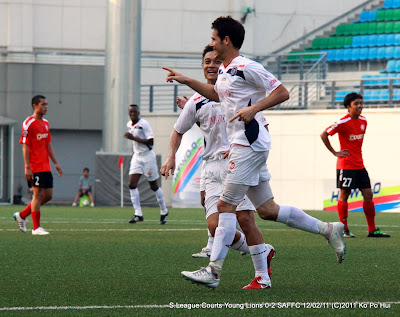 For the record, Croatian striker Mislav Karoglan (pictured above, rising his right hand) was the other scorer in the 68th minute in front of the crowds of 2,534 and I need consistency lighting in my next shot assignment.