By Ko Po Hui January 23, 2011
Was at the pre-match press conference ahead of tomorrow's friendly match between Singapore's Olympic squad and their Malaysian counterparts. 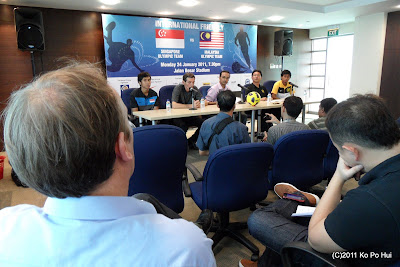 "It's a good opportunity for us to get ourselves prepare before the game against Yemen." said coach Raddy.

"It's a chance to allow young players to gain some match exposure against a good team like Malaysia." he added while admitted that the hastily arranged fixture has not allowed him to have many options to select the players he wants.

Concurring his counterpart's view, coach Ong (pictured above, while speaking to the media) agreed that result is secondary for the friendly fixture.

"It's about gaining the much-needed match exposure on international level that to me result is secondary.

"And we hope both teams will have a great game tomorrow." said the bespectacled coach.