Where the ball feel like "kentang panas" in the first half

We were never looked comfortable with the ball, as compared to the Malaysians in the first half. 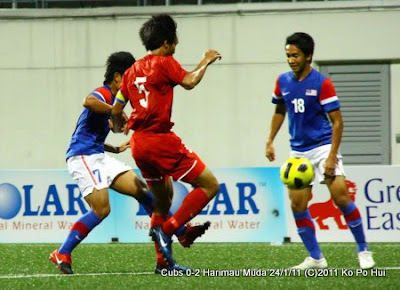 Midfielder Irfan Fazail (number 7) triggered the scoreboard in the 23rd minute
While some fans were hoping the plastic surface of Jalan Besar would give the Cubs some advantages, but it was never the case.

With their much dynamic pacing and possession play, it was not surprise to see Harimau Muda chalked up two goals before the interval due to some hesitant defending. 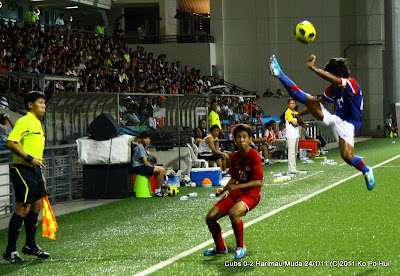 Much better second half display by the Cubs with Coach Raddy replaced almost half the squad to show that Lions' fiery that fans were looking for.

And it seems to work in rattled the nerve of the Malaysians that coach Raddy (pictured below) remarked in the post match press conference that,"they (Malaysians) were chasing us and trying to attack us on counter-attacks." 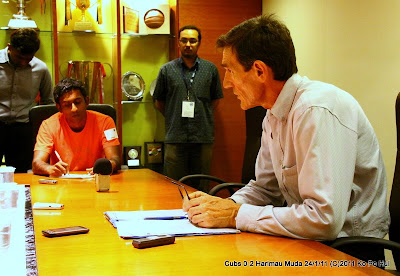 "Although I felt that my team were 'too hurry' in moving the ball forward in the first half, which we should keep more of the possession." said coach Raddy when assessed the Cubs' first half performance.

"However, I'm satisfied with the work done and I hope to see better understanding between the players and self-belief in themselves." concluded the Serb tactician. 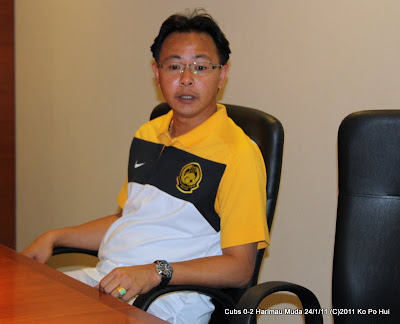 Meanwhile, the Malaysian coach Ong Kim Swee (pictured above) believes the Cubs can improve after "a month or two" during his meet up with the press after the game.

He opined that because his team have been together for a long time, thus there are better understanding among his players as compared to the recently-assembled Singapore squad.

"I believe we stand a great chance in making to the next round, although I think it's not going to be easy when playing against Pakistan in Lahore." concluded the ex-Sarawak player when being asked about his team chance in the pre-Olympic qualifier next month.

SOME THOUGHTS FROM A FELLOW FAN
As you guys may recommend Neo Chee Seong, who recently contributed two articles as a "guest columnist" to this blog shared his thoughts via the blog FB group. And below are extracts of what he thought...

"Fair enough, the first half team were mainly seasoned campaigners in the S.League, but it was due to woeful finishing which brought about this result.

There are way many positives to draw from this game. Shafiq Ghani, at such a tender age caused confusion in the Malaysian defence. Zulfahmi Arifin also dominated the midfield but to lose out due to the lack of support.

I really foresee a future with this team. But first things they need to focus on will be their final ball and their finishing, as well as their composure and confidence when they hold on to the ball."

This is highly commendable. This gesture is really hard to come by."

FOR MORE PICTURES OF THIS MATCH, PLEASE CLICK HERE.