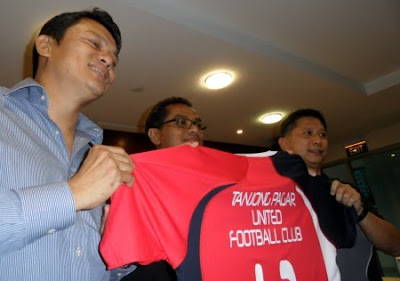 RETURN OF THE JAGUARS
Only from the mouth of Mayor Zainudin Nordin, the president of the Football Association of Singapore that it's finally confirmed the returning of Tanjong Pagar United back to the S.League family after weeks of speculation in the local football fraternity.

PLAN FOR THE FUTURE
Also at the same media briefing session, the mayor shared with the members of the media the progress and the upcoming programs for the local football, which was recently thrust to the limelight following the shock disbandment of the Lions after a poor Suzuki Cup outing last month.

With the disbandment of the Lions, it was told youth players will be the cornerstone of the national team rebuilding process and Mayor Zainudin had set the target for the national U23 squad to make it to the final of this year's SEA Games football competition to be held at Palembang in November.

"FAS will rebuild the National Team with the core of the players aged Under-23. As I said before some experienced players will also be infused into the team to strengthen the National Team." explained Mayor Zainudin during the session held at the Jalan Besar Stadium. 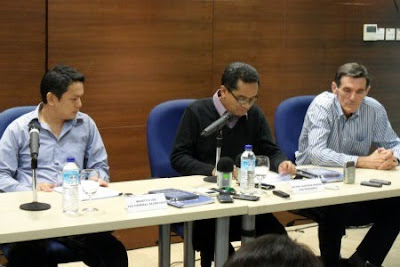 The statement was echoed by coach Raddy Avramovic (pictured above right), who attended the session as well with FAS secretary general Winston Lee.

"I'm not happy with (Suzuki Cup's) result, and we are looking forward to introduce more new players to the National Team, mainly from the Young Lions." said the Serbian tactician.

"It is not something special, as we had done something like this before in 2004, when we made a new selection, we retained some of the experienced players to help those younger players then and we are just doing this again.

"But then again we can't do this (rebuilding process) if we don't plan this long before " added coach Raddy on the rejuvenating process of the Lions.

Despite the main core will be from the Young Lions (for being the base of the Pre-Olympic squad), coach Raddy assured that eligible players from other clubs will be still be considered, when he revealed that training session is actually on-going to get the squad prepared for the Olympic qualifier against Yemen in February with some of those not from the Young Lions.

RADDY REFUTED "RESIGN" CLAIMS
On the same occasion, coach Raddy set the record straight by reject the claims in the media that he offered to resign after the Suzuki Cup.

"(I think the) offer to quit as coach (as reported in the media) was not the case and at the end of the day, it's up to the FAS to decide whether I'm staying or I'm going."

"And I thought some media was unfair (on this matter) that I remained silent in some ways, it was like 'trial without jury' and some of the things said were not right." as the Lions' coach registered his unpleasantness over some misleading reports in the media following Hanoi venture which he claimed some of those eventually fueled negative public sentiments towards the team.

OTHER NOTABLE KEY POINTS OF THE BRIEFING
get your instant update of this Blog!!