Prove me wrong if you get the nod

The revealing of the identity of the possible 12th S.League team being Tanjong Pagar United had set the buzz not least as Kallangroar.com (as pictured below when a poster claimed the Jaguars are being the "12th" team)

And with confirmation of such possibility by the two Mediacorp media outlets - Channelnewsasia and TODAY (screen-grab below). 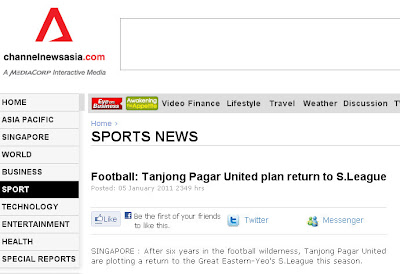 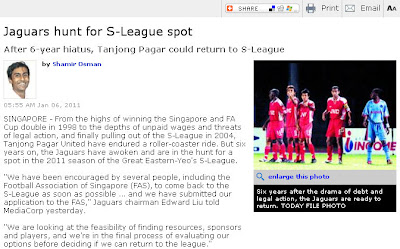 "TODAY" published the story TODAY.
So it therefore more or less set the path of the possible return after sitting out for six years for the club that traces its roots back in 1975 with the formation of Tiong Bahru CSC under the guidance of Mr Richard Woon.

But being someone who always believe is having solid foundation laid before hand before the admission (readmission in the case of Tanjong Pagar) of any team in the S.League, I have a few questions to ask here.
Just count the list of "one-season" clubs we had in the past, and shouldn't see why such a scepticism among the optimism of the fraternity.
logged down by Ko Po Hui at 09:29:00