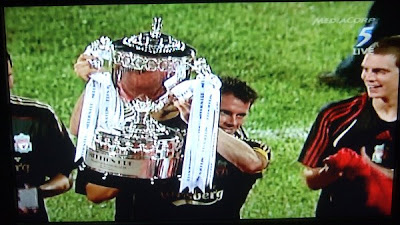 (Picture from TV) Doesn't this trophy looks like the Malaysia Cup?
It was a soft, deflected goal from Andriy Voronin at the stroke of first half and the lapse in an indiscipline Singapore' backline in the second half saw the visiting the Liverpool ended their Singapore "holiday training camp" with a win over the hosting Lions at the heaven-know-when-will-tear-down National Stadium.

To be honest, I thought we did well to hold the 18-time English Champions for large part of the first half until that Voronin's strike.

But sad to say though that lack of discipline and composure eluded the Lions as they cracked as the game progressed.

What a shame as it was an ONE half performance, but NO SHOW in the second.

"thinks it's a shame we didn't give Pool a better fight... Better defending could definitely have prevented 2-3 of the goals!"

"I guess there was just no direction of whatsoever, individually they played okay I thought, but they were like 22 lost lions :("

"To think Liverpool lads like Kuyt and Benayoun did give the hosts a lot of respect from their attitude during the game."

" is amused how people, who know nuts about liverpool, supports liverpool, because they're liverpool."

"Singaporeans are cheering as our national team is being demolished..."

" Sad to see my fellow Singaporeans cheering for a foreign team instead of our home team....."
logged down by Ko Po Hui at 21:22:00