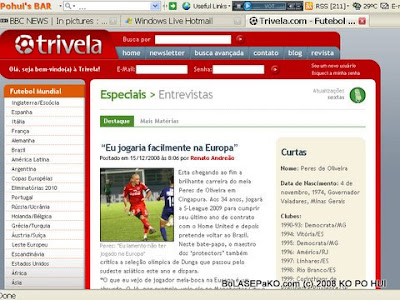 A screen-shot of the Peres's interview

While everyone was gluing on the AFF Suzuki Cup, a Brazilian acquaintance sent me weblink of the interview he conducted with Home United's midfield maestro Peres de Oliveira, who currently holidaying at home in Brazil.

In this interview, Peres shared with Renato Andreão, who conducted the interview, his thoughts on various issues like the recent visit to Singapore by the Brazilian Olympic squad, the two coaches that he felt indebted to in his footballing career and what he likes about Singapore.

The interview was conducted in Portuguese, you might required "Google Translator" (though flawed, at times) to translate the text into English.