So this is gonna be our HOME... (the PLATFORM) 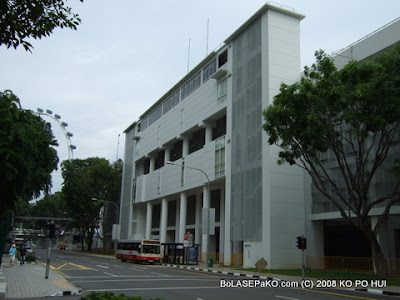 The bland outlook of the facade of the Platform
... for the next few years until the completion of the much-touted SportsHub in mid-2011. 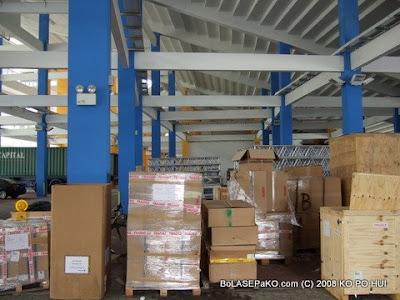 Initially, I thought this marvel structure is out-of-bound, only later I was informed you can simply walk in anytime like nobody business (thanks Shamir for your tip-off), despite the barricades and all the stuff loaded at the basement of the main stand (for the upcoming F1 race.) 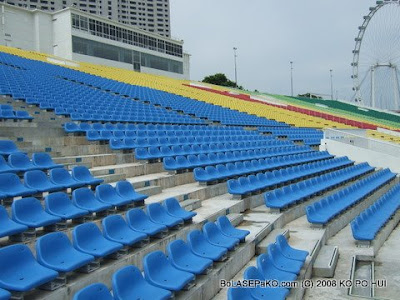 Multi-colour plastic seats are the trademark of the platform. 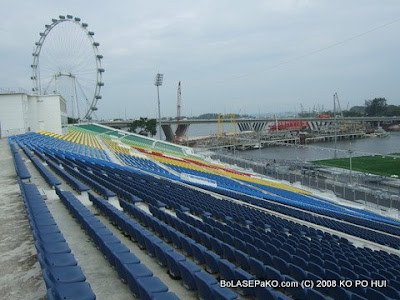 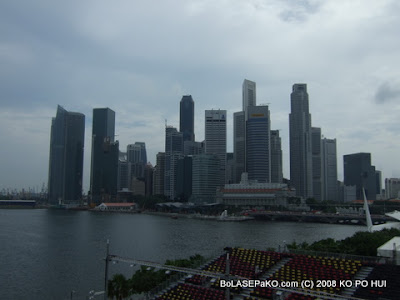 And there we have it, located right in between the two landmarks - the Singapore Flyer and the fame Singapore skyline, if the actions on the field is NOT gonna entice the spectators, at least they will be given a choice to visual remedy by these two landmarks. 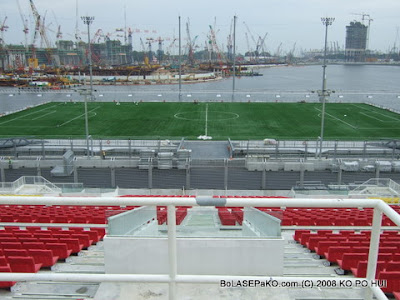 I think the red sector of the main stand will be reserved for the VVIPs and their guests, since from where I positioned to take this shot, this is supposedly to be the best seat of the house (remember the President seat here few weeks ago!) 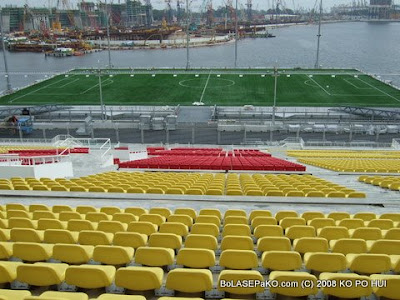 Slightly further up from the red sector is the yellow sector, given its middle positioning in the stand, I would not be surprise that this will be the "premium" seat of the house without having to tilt their heads to the left or right.

Below are some of the pictures taken from the left and right of the stand. 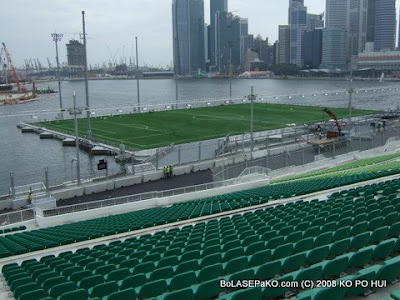 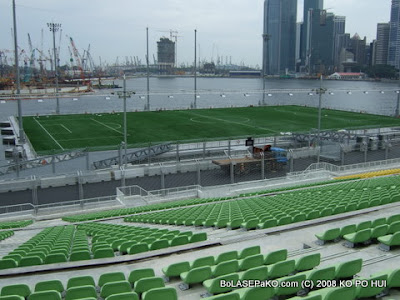 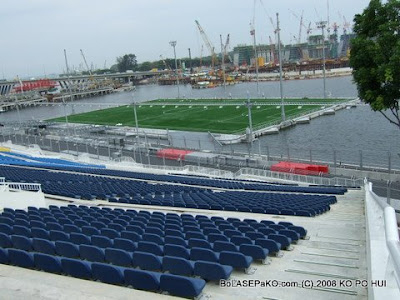 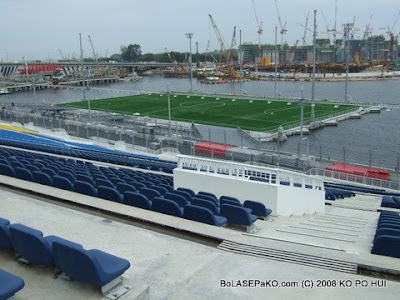 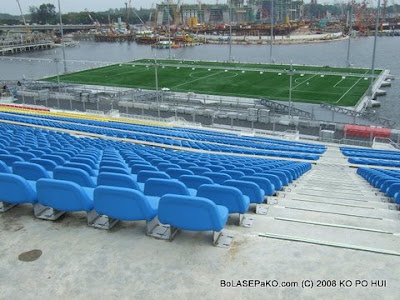 As you can see for yourself, seating at the extreme end of either the"green" or "blue" sectors, chances are you are going to strain your neck and of course, this would be the "budget" seats of the house (unless the organizer decided not to open this part of the sector for health reason)! 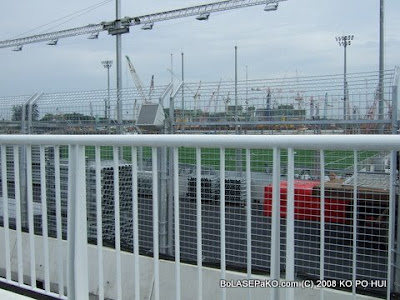 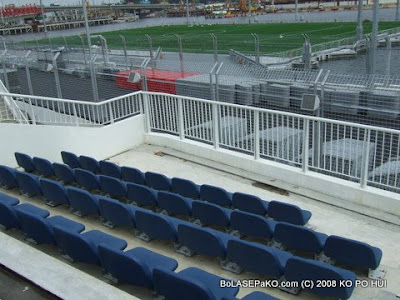 Organizers may also want to take consideration on opening seats that are near to the ground level (just look at the pictures above, which are self-explanatory). 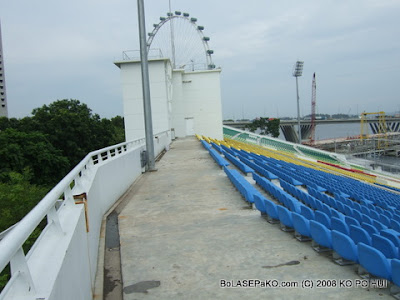 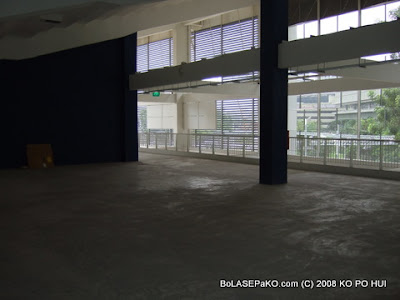 I'm not a smoker but if there's an urge to have a quick puff, there are two locations (pictured above) might be a good idea for something like the "yellow box" :p 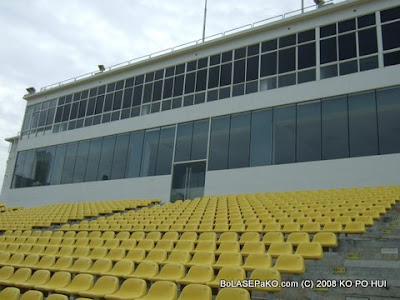 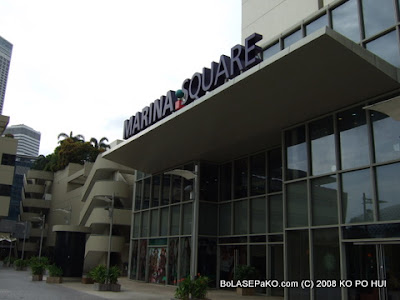 Any as mentioned before in my previous entry on the platform, the ideal location of the platform is also due to the fact that its proximity with major shopping malls like "Marine Square", where fans can eat, shop before or after the game.

Maybe it's already too late but I got one question that I been pondering: WHY IS THE DESIGNER IN THE FIRST PLACE HAD THE EXTENDED WALKWAY FIXED BETWEEN THE SEATING GALLERY AND THE PITCH?

Would it be feasible to have something like this instead (as illustrated below)? 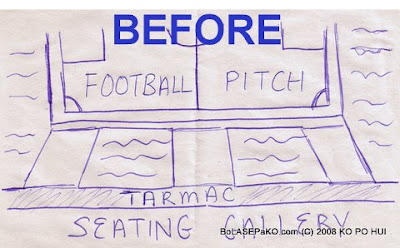 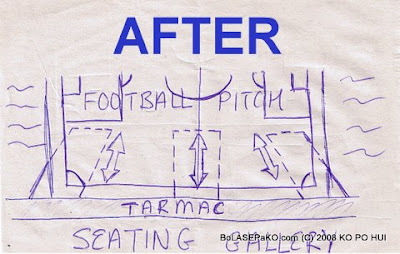 A retractable walkway that would linked up the pitch and gallery as now fans are complaining the distance between the gallery and pitch, which is now the sticking point on whether would the Singapore Cup Final be held here!

Unless engineering difficulties had forced them to drop the idea initially (if they had thought of it in the first place).

And the worst part, where is the shelter??