Yes, I mentioned “amateurism” but corporate could play a part too.

I know some of you folks out there don't fancy the idea of reverting back to amateur or semi-pro football, but this shouldn't be see as a setback in improving the game on the whole.

Just take a hard stare at the current local clubs' set-up, except for a small minority, the large number of them are struggling to stay afloat.

They just don't have the muscles to complete with the big guns and helpless in stopping those they nurtured from leaving for a better wages offered elsewhere.

Despite having the salary cap in place, it's not secret that some clubs are running on a shoe-string budget.

As an amateur or semi-professional meaning one will be playing the game without or little monetary gain and largely for the love of it.

As a professional player meaning one bread and butter depend on playing the game, the pressure to perform and maintain oneself in tip-top condition is a test of self perseverance to achieve that feat.

While I'm not saying being an amateur player, one can afford to be slack but the pressure on being one is definitely going to be lesser as compared with their full-timer counterpart.

Former Gombak United's star striker Toh Choon Ming should served as an example how a non full-timer can excel in his game for the Bulls, as compared to his days at Sembawang Rangers.

Given the fact that life as a pro footballer is a short one and unlike their European counterparts, whom some are likely to continue their involvement as a media pundit, coach or even as a players' agent, it's not hard to foresee the limitations faced by these pro footballers once their "game over".

Of course, the question will be asked: Given the scarce timing to train and play competitively and on top of that, these folks have to juggle with their other commitment (eg.: personal and work-wise), would it be stress for them?

Which is why I wonder if the Business Houses League still functioning?

From what I read Business Houses League is (was) a league that comprises teams from various companies in this country, where players are employees of the company's team that play competitively in this corporate league. 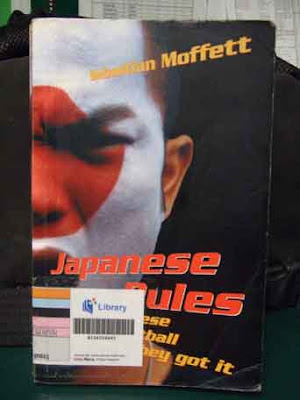 It works something like this in what this book I read some times back (above), where in Japan, employees were be given time-off to train and play for their company's team in tournaments as such.

Now, this is what I wonder if such model is feasible for our needs?

Players being employed by these companies, work, train and play at the same time, any good players would therefore be groomed as a convenience marketing tool for his company (aka the “star” players), players themselves need not worry if their playing days are over since they will still remain in this company as a normal employee.

The minus points of this plan:
As I always do: I'm here to give some suggestions but I leave the room open for discussion...

To summarize the whole thing: SHALL we see this as an amateurism that blends well into the professional setup?