I know it's none of my business... 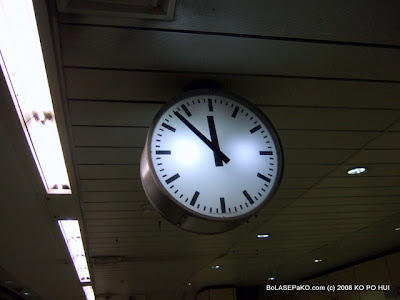 But having came back from Jalan Besar close to midnight, is something we really ought to look into this issue.

The AFC Cup match between local powerhouses Home United and Indian side Dempo SC, although not as prestigious as any Asian Champions League (ACL) game, it was suppose to be something not to be ignored too. Given its status as a platform for second-tier club sides to challenge for regional supremacy.

I'm sure the organizers should be well-aware of the lack of interest in this second-tier continental tournament in this part of the region (judging from the minimal media coverage and fans' interest, both whose focus are on the debut F1 race in Singapore over the weekend). 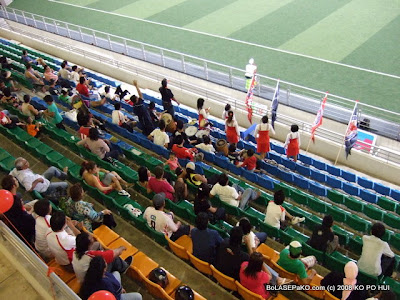 Certainly, we can't blame the fact of the 8.45pm kick-off given the pre-existing circumstances but such a late kick-off timing is something not the local fans are accustomed to (as most matches kick off at 7.30 or 7.45pm).

Other factors like how the teams had to complete through the group stages before emerged to the "knock-out" stage also taken toil on the participating teams. 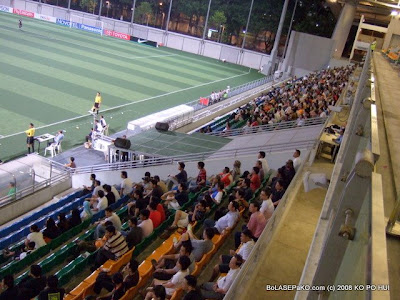 Taking part in continental tournament as such, on top of their domestic commitment, require these teams to travel constantly around the region during certain part of the season.

Not only was it tiring, the teams quite frequently need to request changes in their domestic fixtures to accommodate their continental commitments, thus it not only costs disruption to theirs but also the rest as well.

The solution?
Once and for all, scrap the group stages and implement the "knock-out" format instead!

It's all down to one team's luck whether who will their first opponents and as an incentive to all participate teams, winners of each "knock-out" match shall be awarded some prize monies for their effort, while the losing side - empty-handed.

With the cash as a form of motivation, as fans, we will hope to see a more keenly-contested match instead playing around with points, goal differences etc. to get past the group stages.

In order to make it more interesting and intriguing tournament, perhaps the organizers should have it this: instead of planning this proposed "knock-out" competition in line with a pyramid format, how about after the completion of each "knock-out" stage the teams will go through a "lottery pick" to decide who meet who in the next stage?

I'm not sure how this new idea works well with all, as some would prefer the old format so as to plan out and refine their strategy along the way but the whole idea is to make everybody guessing and keep everybody on "full alert" instead of having those "I know I playing who next and plan what to do" kind of approach to this tournament.

This suggestion is to weed out the kind of stagnation this continental tournament is facing which is some we ought to admit it and that's the fact!

And bring back the romance of a Cup competition ....

SNAPSHOT FROM THE PRESS CONFERENCE 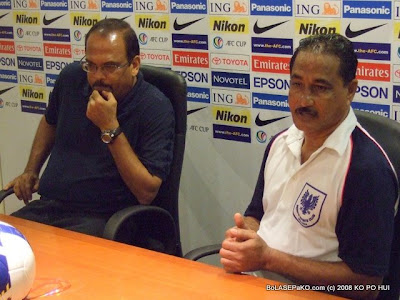 Dempo SC's coach Armando Colaco (right) commented it's good learning experience for his team and Indian football on whole to benefit from playing in tournament as such like the AFC Cup.

While his counterpart, Mr P N Sivaji of Home United (left) said his team shown tremendous character in the game having played for large part of the game with 10 men after key defender Valery Hiek was sent off in the first half after collected his second yellow.

For the record, Dempo SC beat Home United 5-4 on aggregate to make it to the semi-final of this competition