What a forgetful night....(for Rams) 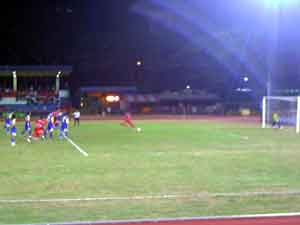 (Kengne Ludovic's spot-kick took the lead for the Tigers)

It was definitely a better match as compared to the previous night (Tuesday) at Bishan.

The controvesial Agu Casmir made his debut for the Woodlands Rams, coming on as a second half replacement. 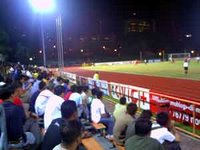 Not sure if the fans are actually cheering or mocking the Nigerian-born former international, by chanting his name "Agu, Agu" whenever he touched the ball or making any attempt upfront (ironically, the word "gu" in Agu actually mean "cow" in Hokkien.)

Glad to see 'keeper Fajar Sarib back into the starting line-up for Balestier.

First made his presence felt years back when he was unexpectely thrushed into limelight as the replacement for disgraced Abdul Malek, having last played for Home Utd after he was transferred from the Toa Payoh club. 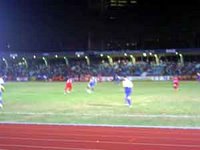 Sad to say though it was not a cleverest move of all as he slowly faded away from the scene before return to the Tiger's den this year.

The 2-2 draw was a fair result for Balestier,

Knowing they were up against one of the title contenders, they slowly bidded their time and delivered the sucker puch when it matter most.

Though, they appeared to be in a lost after a switch in formation at the start of the second half by the Rams, which saw they conceded two quick goals, they gradually regained the composure and leveled the score through new signing and former Rams defender Mohd Mardani.