Some of the You and me at the stands

The idea was not to see or anticipate an exciting match but to mingle among the crowds at the opposite end of the park.

Some of these "fans" are probably the "real" ones of the crowd.

They tend to be pretty abusive during the match since the stakes are pretty high.

So much so they took upon the role of that as the coach, the referee and the linesmen. 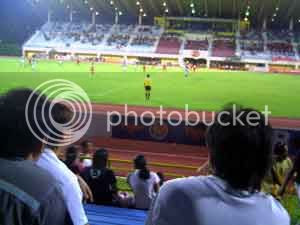 Shouting and making their presence felt through the colourful language used (not without, of course, sending one's "regards" to one's mother).

When things were not going their way, they threw their arms in the air, stomped their feet on the ground to vent their frustration.

The only thing that please these folks is when things went their way (i.e: a goal being scored).

Those are probably the only time we see these folks cheering and brim with smile on their faces.

It's just the common sight at the grounds all around the world.

They can be someone just like you and me or someone we know, filling up the stands everywhere. 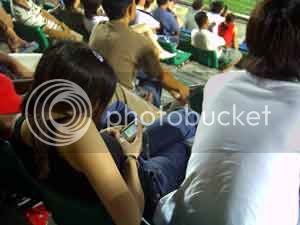 Other this group of "fans", there are also people who we classified as "tag-along".

Sometimes, wondering why bother tag along when she/he is not interested in watching what they always say the "silly game of 22 men chasing a white spherical leather object".

So much so that they jolly well "isolated" from the rest with their own activities (i.e: reading newspapers, text messaging or chatting over the line, as illustrated in the picture on the top)