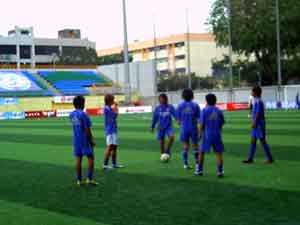 (Albirex's players warming up before the start of the match )

That's how many people turned out at Jalan Besar stadium for the first game of the season.

Somehow, Young Lions' swift counter-attack game that did so well against Shahzan Muda failed to make its presence felt against the White Swans.

Wasn't really a pretty game to usher us to the new season.

So much so celebrity referee Dave Roberts tortured the folks at the stands, by extended the add-on time from 3 to 5 minutes before signalled the end of first half.

I am not sure if the artificial turf is to be blamed for the scrappy play for the night.

Unpredictable pace of the ball coupled with high bounces that goes with it as both teams struggled to come to term with the pocession.

Nonetheless, new signing Qiu Li saved the day for the host when he 90th minute strike leveled the score after Albirex took the lead slightly past the hour mark at 66th minute. 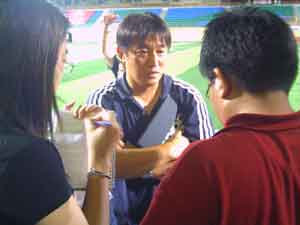 (Albirex's coach Ichiro Otsuka talking to the media after the draw.)