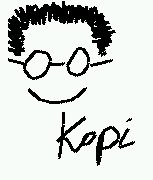 
It was not some sort of milestone but just a trial on publishing this post via email.

It was because not long ago, l borrowed a book on blogging from the library that I only came to realise that posting via the email is possible.

Unfortunately, the example shown in the book only illustrated how it was done using test but it didn't mentioned if included picture with text is possible, so by having posted the comical illustration of myself (pictured on the left), then l finally know the outcome.

(P.s: Apparently, posting via email can only be done in text, so the picture was included later through the dashboard)
logged down by Ko Po Hui at 23:57:00