This is NOT the way to win Elections 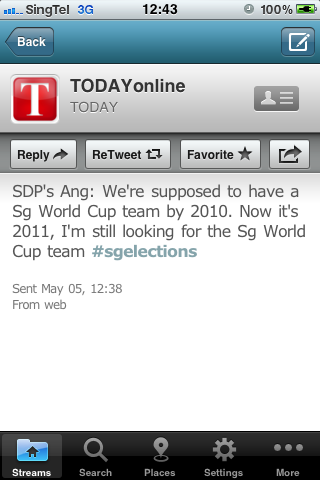 With the ongoing election campaigning, it's inevitable to see some fault findings taking place between contesting parties

But as far as i concern, football and politics should never mixed (even though, we have had several political office holders helm the top post of local game governing body).

Which it why when I saw the tweet (pictured above) that quoted a candidate's remark that I thought it was something uncalled for.

With much due respect to the quoted candidate, I regret the fact that the aborted "GOAL 2010" blueprint that projected to see Singapore in last year's World Cup was used as a "easy target board" to question certain government policies.

I'm not sure how and what had the quoted candidate contributed throughout the cause of the aborted project, but merely making use of football for political gains is something uncalled for.

Stop ballyhooing for votes using the game and leave football alone, thank you.
logged down by Ko Po Hui at 13:27:00