The TWO sides of it and depend on where you see... 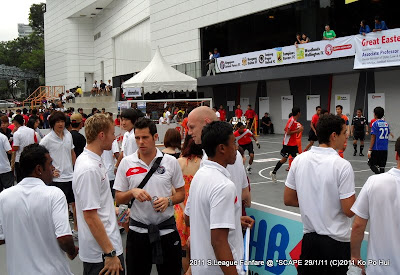 Just came back from the S.League Fanfare held at the *SCAPE at Orchard Road (pictured above).

I think it was the first in years that the annual pre-cursor of the League being held in the downtown area with aim to use the music, the carnival atmosphere created to draw the attention of any random passer-by to take a peek what's going on and tell them the new season is going to kick-off in 12th February.

However, the general consensus around the place seems to be the fact that it's more of an "in-house gathering" with players, officials and loyal fans mingled around and just like a friend who sums this up by asking:"Why aren't there any publicity of this fanfare on the papers?". 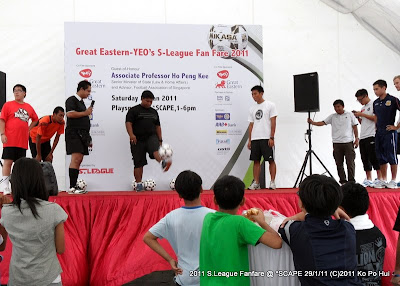 To be fair, the media information of this event was issued only a few days ago (on 26th January 2011 which I duly put it up here), but that bags the question why not much publicity push to follow up on the mainstream media??

"There's nothing much to cover" said one of the "mainstreamers" who I happened onto and was there to just take a look, while at least I managed to see another who was there to put up a write-up for tomorrow papers.

But just like the end of the day, as a lot of people had always said it's the quality of football on the field that's going to draw the crowds in (a point that was affirmed by TODAY's Sports Editor Leonard Thomas in a live radio call-in program in the morning), event such as the fanfare is just a mere initiative to draw the attention of the public. 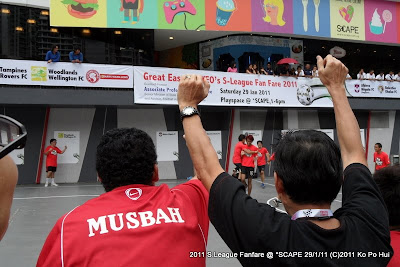 However, if pre-cursor such fail to fuel the bang we are always looking for in that sustainability throughout the long season, it could simply be a waste of effort, rather than the monies and time that were spent in it to organize in the first place.

Of course, thing can't be help when the weather was wet...