Having read what my fellow blogger Arief blogged earlier on in his blog, I received this press release from "Football Management International & Trebol Sport International" that reads

We are pleased to announce that Bangkok Glass has signed our player, Sylvain Idangar on a 2-year contract for an undisclosed fee for the Thai Premier League season 2011. He was accompanied by our FIFA licensed agent & Operations Director, Marco Guimaraes during the press conference to announce Bangkok Glass' players for the new season.

This release came just a few days later after "The New Paper" came up with a story that titled "Centralised trials not working out?" (pictured below) 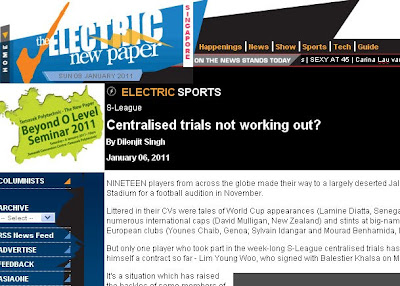 Inside the story, it was revealed that out of the nineteen players who attended the trial only Korean Lim Young Woo, who signed with Balestier Khalsa last week from top K-League club Suwon Samsung Bluewings, while the rest failed to land any contract with the S.League clubs at the time of writing this.

It probed further into details why the low take-up rate by collating opinions from various S.League coaches who were quoted inside this report and mainly attributed to the scheduling and the format on how the trial was conducted.

While one of issues being highlighted in this report was the players were "under impression that they would have a high chances of being offered contract at the end of the trial by their agents" as claimed by one of the coaches who spoke to some of them.

Out of the 19 players, so far one player was snapped up
Pertaining this comment (in bold italic), one of the agents involved during the centralized trial, Mr Marco Guimaraes, Operations Director of Football Management International & Trebol Sports International, rejects the claim of such promise was made to those players he represented.

"First of all, we never over promise the players before they come here. We informed them the about the success rate of the past few centralised trials so they knew the level of competition amongst the trialists is high here and nothing is certain." said Guimaraes, who is a licensed FIFA agent based in Singapore in an email interview with this blog.

"Then again, the players brought in by us were screened by FAS and only the ones who are better than the current crop playing in the League are brought in.

"Till today, we are still puzzled as to why the likes of Sylvain Idangar, David Mulligan & Lamine Diatta (pictured above, who featured in all Senegal's World Cup matches in 2002) weren't picked up." added the man whose agency was involved in brokered the transfer of Lim to Balestier with their Korean partners .

Guimaraes went on added it is an "open secret" that the S.League clubs lack the resources to operate a proper scouting system. This was precisely why the scouting arm of his agency was formed to address this issue and hope to fill the gap of the lack of quality import players.

While he has no comment on the scheduling and format of the centralized trial that was held, as he said those were decided by the FAS, Guimaraes suggests some improvements could be taken to remedy these issues.

"Perhaps, a meeting could be organised between FAS, the clubs and us to synergize things so that we can have a coordinated effort this year to address the problems raised by the coaches." he opined.

Despite the setback, it was revealed that his agency had brought in another five more players for trials with various clubs and confirmed the recruitment of Lebanese international Mounier Raychaouni, whom he represents, as a Woodlands Wellington player for the upcoming season.
logged down by Ko Po Hui at 16:28:00