(The content of this entry is obtained via the transcript provided by Integrated Marketing Solutions Group [IMSG] - the PR agency for Nike Singapore)
(P.S: The copyrights of the videos depicted in this blog entry belong to Nike.) 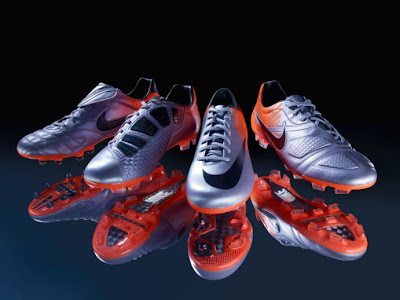 Nike designers have reduced the weight of each boot so players can perform at their best. Lightweight construction, intricate engineering, carbon-enforced strength and high contrast colors distinguish the boots.

The high contrast colors (Metallic Mach Purple and Total Orange) are engineered together for enhanced visibility. For a footballer this unique combination is designed to increase visual performance enabling them to quickly spot their teammates and execute a game-changing pass.

Research shows that the average energy expenditure of an elite player is over 1,000 Kilo Calories per game for a 75kg player. Reducing the weight carried by players helps reduce the energy needed over the course of 90 minutes. By delivering lightweight supercharged performance to all four of Nike’s statement level boots the goal is to give players an edge in the final stages of a game.

The boots are distinguished by the following factors:

An average person’s vision is 99% peripheral. Under 1% is considered foveal, or focused vision. To spark increased focus of peripheral vision Nike designers analyzed the color spectrum to identify two, high-contrast colors, so that when a player is running with these boots the colors trigger a stimulus to rapidly tune peripheral vision. Mach Purple and Total Orange provided the perfect blend to create this effect and performance advantage. 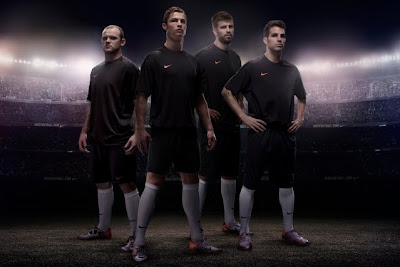 Catch these stars in action in the "Elite Series" in June
The Elite Series is available to players at all levels and also incorporates Nike Football+ which features exclusive insider access to the world’s best coaches, players and teams for total game improvement. Nike Football+ Master Series builds expertise in Control, Accuracy and Speed through elite insights and pro training. This includes a special Elite Series signature move from Atletico Madrid and Argentina star Sergio Aguero that will launch at the end of May.

All four Elite Series boots, the Nike Mercurial Vapor SuperFly II, Nike CTR360 Maestri, Nike Total90 Laser III and Nike Tiempo Legend III, are available at retail and at www.nikestore.com as of May 22, 2010.

Here in Singapore, the boots are available at Nike Wisma (pictured above), Nike Vivocity, and Weston, at the following prices:

For more information including multimedia, visit http://www.nikemedia.com.
logged down by Ko Po Hui at 01:00:00

Email ThisBlogThis!Share to TwitterShare to FacebookShare to Pinterest
Classifed as: feature, Videocast