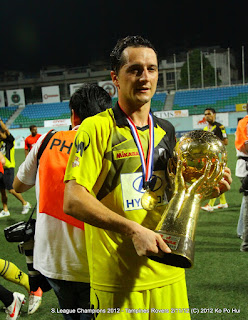 THE DECISION
“I had decided that after we won the championship!” said French defender Benoit Croissant as he would like to put the record straight on his decision to retire from the game after helping Tampines Rovers to retain their league title back in last November (pictured left).

Following the nail-biting finishing towards end of last season's Great Eastern Yeo's S.League title race, the Stags had targeted for something more ambitious with their aim to improve their performance on the continental front after a dismay outing in their AFC Cup campaign last year.

As such, Tampines Rovers wielded their axe and saw them offloaded a number of notables from their payroll alongside with Croissant at the end of the campaign as reported in the media recently.

However, the former Sheffield United player actually had other plans drawn up after the end of last season with his mind being set for the next chapter of his life on his own accord.

"I took this decision last month when I went back to France for vacation." revealed Croissant in an email interview with this blog.

"I know that some people will be surprised, as I am still very fit and proved it when I scored my last goal against SAFFC which brought Tampines back on track for the title.

"But I had enough of signing one-year contract and being under pressure every year (to perform). I want to ensure a prosperous future for my family and also spend more time with them."

“I don't want people and fans to misunderstand anything after what was reported recently on the papers, as it is my own decision to retire from playing.” added Croissant on his intention to hang up the boots after a career that spanned over 15 years that saw he turned out for SC Telstar in Netherlands, Asmant Assiut in Egypt since started his professional career with ESTAC Troyes in 1997.

BEING A TELEVISION HOST
Despite moving places from one continent to another, the 32-year-old had planned well for his life after football with his sporadic involvement in other aspects in between his playing career.

Just like how he dabbled into television scene as a host for a highlight show called “GO” that showcased European football while playing for Asmant Assiut in Egypt.

Much attributed to Croissant's ability to speak Arabic, which he has some basic knowledge before he headed to the Middle East.

Said the former center-back of his time as a program host: "I was approached by Nile TV International (a local television network) to present a weekly sport live show in Arabic and French called 'GO' after I was regularly interviewed in the newspapers and on television for being the first French footballer playing in Egypt and speaking in Arabic.

"Despite the fact that it was my first experience as a TV presenter, Nile TV decided to hire me for a second show where I presented highlights of the FIFA World Cup 2006.

"That new experience made me understand that I am able to work in a completely different environment and I realized that I have the qualities to succeed in other fields.” he added.

UPGRADING VIA LONG, HARD WAY
With that belief in mind, the former Clairefontaine (the elite football training center in France) trainee constantly attended distance learning courses to equip himself with academic qualifications to prepare himself for life after football.

"As I had two training sessions per day after I signed my first professional contract in Troyes (a Ligue 1 club) at the age of eighteenth, I could not attend the university (on full-time basis) so I decided to continue my studies by long distance learning courses.

"Honestly, it is very difficult to study while you are a full-time footballer and even more so when you are traveling all over the world, but I will always strongly advise other sportsmen to take the same direction as I do." said the man who graduated from Sheffield Hallam University with a Master’s degree in Business and Sport Management in 2011.

With his vast experience playing in various places with different cultures, getting know the native language is an important key in assimilate oneself into the local lifestyle, as Croissant explained.

"Since I started my career, I always understood that communication was the key component of a winning team. I always made sure to learn the local language in order to exchange with my teammates meaningful information on and off the field.

"Now that I am retired from the field, all these languages and experiences will be great assets as I am now able to deal with all kinds of people and work anywhere in the world." opined the man who speaks Dutch, Arabic, Spanish, English besides his native French.

PLANNED WELL TO MOVE ON
Having set his mind to hang up his boots, the new Singapore permanent resident can now channel his focus to his new venture - Elite Coach Pte Ltd, a company he established with his friend Christian Anseaume that specialized in sport coaching services targeting at individuals, corporate and Institutions.

"Elite Coach is a fast growing company as we have already ten trainers working for us and clients from different nationalities including expats and local residents as well.

"With this venture, I will be able to spend more time and have more responsibilities in developing our new services such as boot camps and our conferences focusing on the relationship between sport and business."

Interested individuals and organizations are welcome to visit the website and Facebook Page of "Elite Coach" to find out more about the programs and services it provides.