Getting the right combination

By Ko Po Hui May 27, 2012
I was at Geylang Field this afternoon to catch the national team in their ongoing centralized training session.

Normally, the session would be held on the artificial turf of Jalan Besar, but with the main ground being used for a televised event, coach Raddy Avramovic and his assistant, former skipper Aide Iskandar led their charges on this obscured turf concealed in the back alleys of Geylang.

Team manager Eugene Loo confirmed with this blogger that during the three friendly matches slated for the coming June, which will see the Lions play against Hong Kong (away - 1st June) and Malaysia (home - 8th June and away - 12th June), that FIFA ranking points will be awarded.

Opportunity to push up the world ranking aside, what probably matter most is to perform well in the year end's AFF Suzuki Cup ultimately. 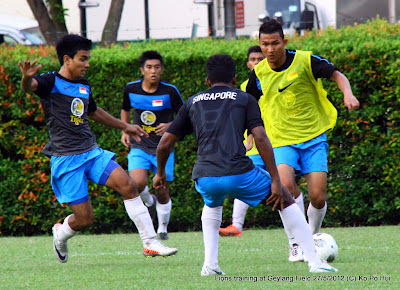 Said midfield anchorman Isa Halim (pictured above in yellow bib on right):"It's has not been a great year so far, especially after the losses in the World Cup Qualifiers,

"So it is important for the coach to get the best combination of experienced and young players to do well in the Suzuki Cup."added the Lions XII midfielder who scored the solitary goal in that ill-fated 7-1 loss to Iraq months ago.

"So far, the new boys have responded well to the training and it's up to them to step up and progress to prove to the coach who selected them." opined Isa on his thoughts on those Lions rookies. 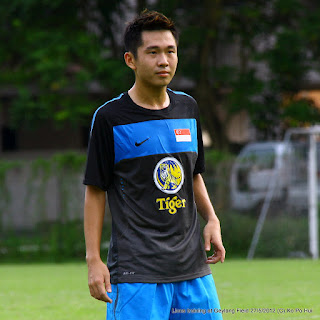 Balestier Khalsa's Poh Yi Feng (pictured left) is one of those nine rookies called up for the centralized training and has adapted well to the regime.

"It has been three days since I started training with the national team and it has been tiring, despite that, it's a worthwhile experience as if something had been achieved.

"Initially, I was nervous and afraid of making mistakes, but with guys like Isa, Baihakki (Khaizan) who have been encouraging new players like me, I don't feel out of place." said the 26 year-old defender.

PLEASE CLICK HERE TO SEE THE REST OF THE PHOTOS