How frustrated can it be again?

Despite all the hindrances facing the National Under-23 squad in their preparation for the upcoming SEA Games, the local game authority boldly set a "final" target for the Cubs.

Nothing wrong for being ambitious, as it departs from the usual modest target to settle for a "semi-final" in the biennial games even if we had our best squad in the past capable for the elusive gold.

Yet, the biggest bugbear facing the team to be led by FAS Technical Director Slobodan Pavkovic is the high number of players being enlisted for the mandatory National Service (NS). 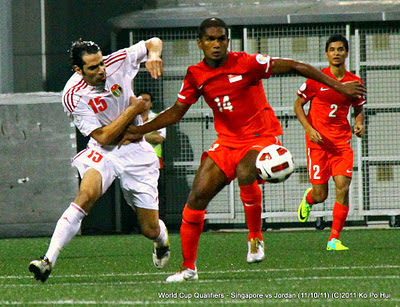 Already several boys found themselves crippled by the ruling, notably being Hariss Harun (pictured above middle) and Safuwan Baharudin (pictured above right) - two of the star performers in the ongoing fading World Cup qualifiers.

As the result of the NS, Hariss was denied a chance to face China and Iraq, while Safuwan was reported having to use a chuck of his leave entitlement to play for the Lions.

All these after fruitless negotiating behind the scene between relevant parties to secure the release of the mentioned players.

While we know it's impossible to scrap the NS policy, yet it happened in a time when the government is talking about having a viable "sporting nation" concept for its people.

The lack of clear define direction to help any sportsman in this sticky mess would further raise more doubt on the whole concept, if relevant parties are committed to resolve this issue.

Just like a posting online by someone might be affected - "less than 20 days to go, TEKONG (NS) or JAKARTA (SEA Games)?" that sums up the prolonged waiting game for all.
logged down by Ko Po Hui at 22:13:00