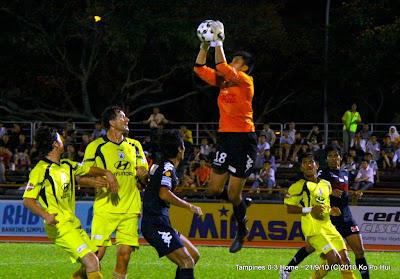 (Pictured above) Home Utd's 'keeper Lionel Lewis rose above to make it safety first
It is now also confirmed a saying that Tampines Rovers will buckle down at bigger stages.

After losing to Etoile two weeks ago at Jalan Besar, they stormed back with a 4-1 away win over the cellar-dwellers Woodlands Wellington last week.

Therefore, inevitable the chips were up and what a perfect setting at home it was as the Stags were eager not only to see their heroes enhance their chance of winning the league title, but also to see the historical milestone to be set by evergreen striker Aleksandar Duric. (Pictured above) Stag's coach Vorawan Chitavanichput on a brave front when facing the media after the lost.
However, it was their guests - Home United who stole the limelight and wrecked their hosts' party at their own backyard with a gallant display that not only kept Tampines at bay throughout the night, shut Duric out of the game, but effectively consigned the Stags' title hopes into tatters.