With five more rounds to go, it's still everyone's guess who would eventually walk away with the championship.

Over the past few days, the title contenders - Etoile played both Tampines Rovers and Home United played with mixed results.

(Picture above) Having lost to Home United on a Shahril Ishak's strike on "Friday Night Football", the Frenchmen came back strongly to beat the Stags on the same artificial surface.

The Stars took the lead through the league scoring leader Frederic Mendy in the 50th minute with Stags' skipper Aliff Shafaein levelled the scores in the 59th minute, but nippy midfielder Flavien Michelini's 66th strike ensured the Queenstown-based club had all three points wrapped. 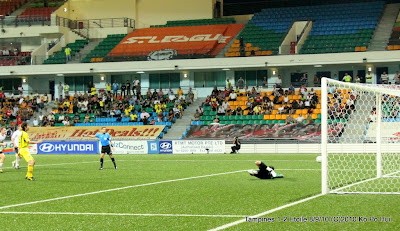 (Pictured above) Korean defender Park Yo Seb would have salvaged a point at least for the Eastern Giants but his penalty hit the upright to see Etoile propelled back to the top of the standings.

All these came at time when Home United got themselves messed up at their own Clementi fortress for the slip-up against Sengkang Punggol, that almost gifted their ex-stalwart Aide Iskandar one of the highlights of his relatively new coaching career against his old club. 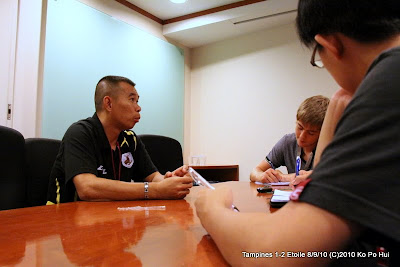 (Pictured above) Nonetheless, as what Steven Tan, the assistant coach to Tampines Rovers, who spoke the media after their defeat to Etoile hours ago, every game now is crucially for his team in their bid for the title they last won in 2005.

A view which equally shared by their fellow title-contenders.