SHORT SCRIBE OF THE MATCH
One thing I know for sure, many of the 5,000 odd crowds at the Jalan Besar Stadium were first-timer (judging from the way they asked for the direction, the ignorance of banning water-bottles and drink cans on the match day).

And one more particular sight of the night was the sizable "Man Utd" supporters turned out to support the local team, which I thought was a pleasant sight (although, I came to realize it was because the Red Devils were once defeated by the Clarets which they would love to see the Singapore side avenge for their beloved team).

Nonetheless, it was a brave performance from the Singapore Selection that was lauded by all who were there. 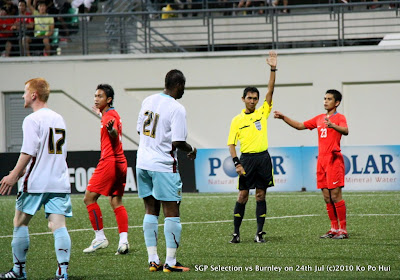 (Pictured above) Referee Abdul Malik raised his armed to signal the disallowing of the goal scored by Fairoz Hasan (right of the picture). 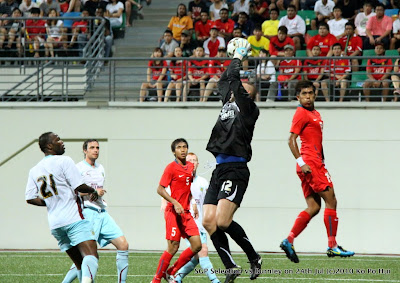 Claret's custodian Brian Jensen folded another attempt by the hosts, as he gathered ball safely in mid-air, while Khairul Amri (on the right) was still "floating in the air"!! 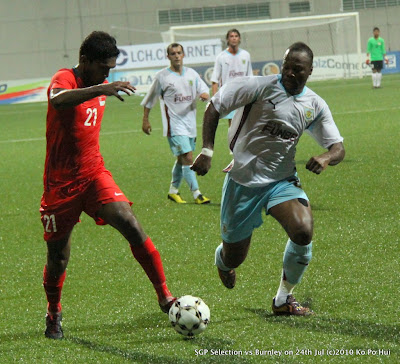 "Boy Wonder" Hariss Harun up against his opposite number Andre Bikey in one of the numerous attempts into the tourists' half. 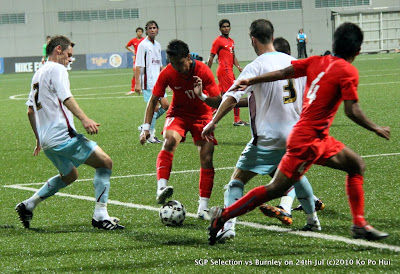 Home United's Shahril Ishak (number 17) shown his flash of creativity from the middle of the park, wonder if the search of elusive playmaker had ended with emerging of form from the Protectors' star? 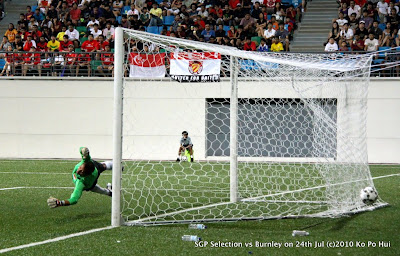 Hapless Shahril Jantan could do nothing to stop this well-taken effort by Chris Eagles from going in the 50th minute. 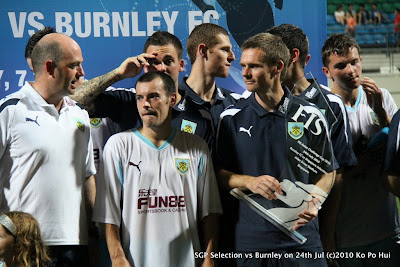 It was a hard fought victory as the Clarets claimed the victory of the night and walked away with the challenge trophy. 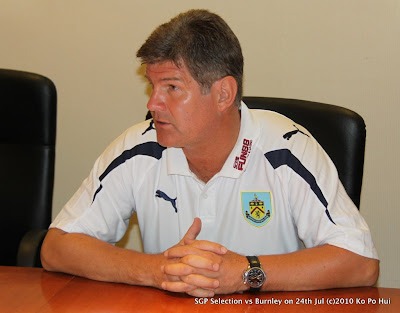 "I happy with the crowd as it was a good turnout." said Burnley FC coach Brian Laws said after the match.

"Coach Raddy was spot on when he said this could be the toughest in our tour, as there are several players with good potential." he added. 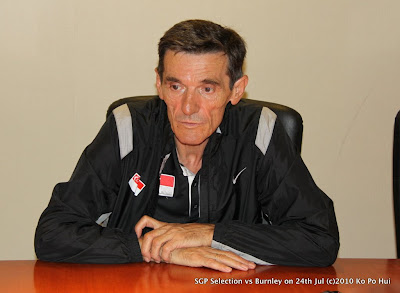 "They had done more than what I expected from them and they gave a good game to those who came to see the match."

Although, the Serbian coach felt the free-kick that led to the only goal"shouldn't existed in the first place."

Real pity we didn't convert the few chances that we had. But we kept possession at the back pretty well, and matched Burnley all the way!

Agreed with Sazali about those young boys that impressed. Not so sure about Fairoz though. Gotta say th...at Shahdan did pretty ok in the centre of the park as well! The future is bright! - Aaron Ong

Gutsy was the word PoHui. That summed up the match for the boys today. I held my head in disbelief for all the misses, but that's part and parcel of football. The only thing I wanted to see today from the boys, were their fighting spirit. Everyone of them showcased that (fighting spirit) in front of all of us to perfection :) - Daniel Lau

Well what matters isnt the result really but how bright the future is for Singapore! For years, i waited and finally i felt that patriotism of local fans in a stadium! I love the atmosphere and i am really excited by the performances of Singapore today. If the national team keeps showing such good football, JBS will be too small to hold all of us. Bring back the Kallang roar! (PS: i am sure the players felt the fans' support tonight!) - Ayyub Kay

FOR MORE PICTURES OF THE MATCH, PLEASE CLICK HERE, THANKS
logged down by Ko Po Hui at 00:33:00