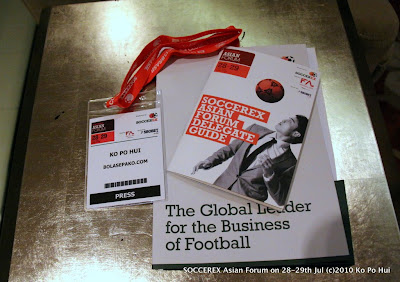 (Picture above) My accreditation pass, press kit
Was at the Soccerex Asian Forum held at the Raffles City Convention Center.

It was networking gathering whosoever in the beautiful game graced by the presence of AFC president Mohamed Bin Hammam.

Beside a section of the venue catered for the exhibitors in the football industry, there were also number of workshops and seminars for keen participants to mingle and socialized around. 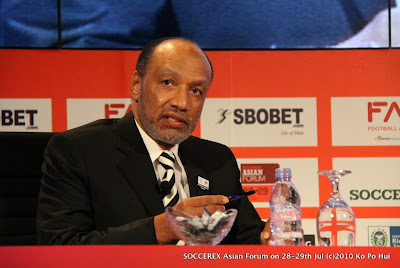 Mr Bin Hammam (pictured above) was an one-on-one interview session hosted by renowned journalist Matt Lorenzo, prior to the start of the day. as they touched on various issues pertaining the game in the continent.

The much-travelled 61-year old Qatari said football is the "key" to unite the people of Asia "as it bring us all together". 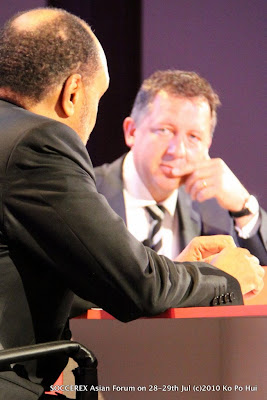 On the possibility of having another World Cup stage in Asia, Mr Bin Hammam (pictured above with back facing the camera, facing Lorenzo) added the 2002 tournament jointly-hosted by Japan and South Korea was a success and it fueled the desire for Asia to see it back in this part of the world.

On the trend of Asian fans seems to be inclined towards support European teams than those of their backyard, the AFC president said, "On the contrary, the (English) Premier League helps to popularize the game in Asia, therefore, it's naturally for the fans to support these (EPL) teams."

RESPECT THE MARKET – HOW TO GROW YOUR BUSINESS IN ASIA
Interesting discussion which I thought might be a dry topic session. 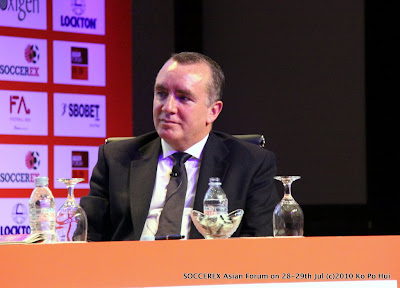 One of the panelist - Mr Ian Ayre, the commercial director of Liverpool Football club believes self-evolution within the local clubs and organizations to see the value growth for Asian market.

"It took years to develop that kind of relationship we have enjoyed with the Asian football fans." said Ayre.

"And how you managed and maintain the ties with our fans in Asia, and giving them the respect and what they want." said the self-proclaimed Kop supporter since 1960s. 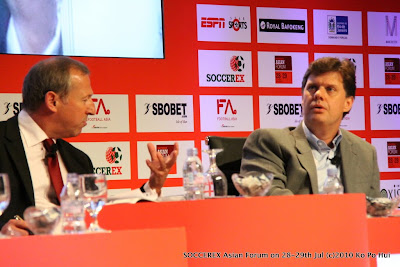 While Seamus O'Brien, the chairman of World Sports Group (pictured above right) added the football market in Asia will only grow bigger and that "sense of self-inferior" that attached to Asian football is a thing of a past.

He concluded his session by added it's essential to be "be local and go local".

THE EVOLUTION OF SPORTS BROADCASTING
In another one-on-one interview session that featured former Director of International Broadcasting and Media Operations for the Premier League, Phil Lines, who drawn his vast experience in dealing with negotiating broadcasting rights for the English Premier League. 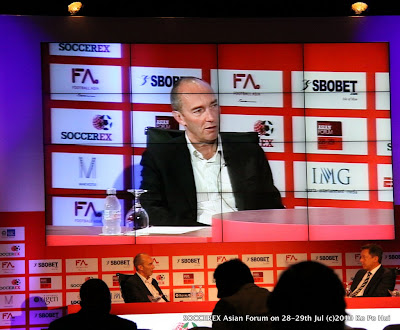 “You got start with a good partnership with a good broadcaster, as the money (earned from the broadcasting rights) will go back to the league.” said Lines.

“If SKY (the present rights holder) decided to drop their bid by 20%, you would see many clubs gone into liquidation and having top players leaving the league.” explained Lines when asked why the Rupert Murdoch-fronted media giant kept increasing and outbid other competitors in the bidding for the lucrative rights to the English Premiership. 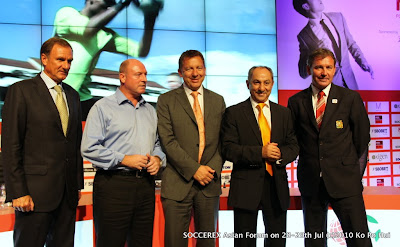 (Pictured above, L-R) The last event of the day was the gathering of the four footballing legends - Phil Thompson, Steve McMahon, Ossie Ardiles and Bryan Robson with host Matt Lorenzo in the middle. 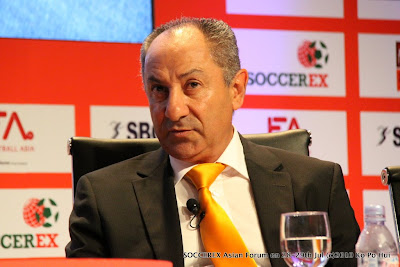 Various topics were discussed during the session moderated by Matt Lorenzo, who jibed Ardiles while introduced the Argentine legend for signing for "Tottingham" instead of his beloved West Ham United way in 1978. 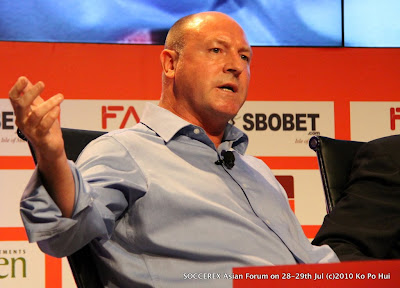 Some of the topics that brought up during the discussions were the feasibility of implement the "Goal-Line" technology with McMahon and Thompson agreed the importance of having it implement to weed out those controversial moments we seen during the last World Cup. 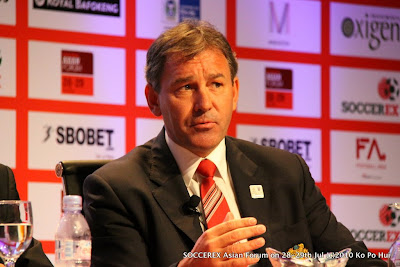 The distinguished panelists also analyzed the England's flopped campaign in South Africa, with the "Captain Marvel"- Robson described the Three Lions' performance against Algeria as the "worst display" he seen. 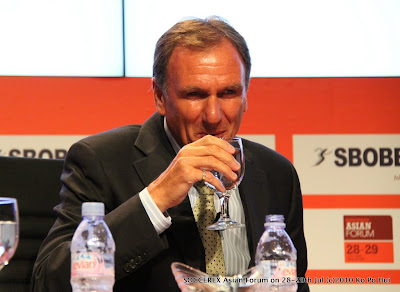 Being the only World Cup winner on the panel, Ardiles said he wasn't surprise to see the stepping down of Diego Maradona as the coach of Argentina, on the separate note the former Spurs midfielder disagreed with former Liverpool skipper Thompson that referee Howard Webb did a good job to officiate the World Cup Final between Holland and Spain.

While Robson suggested it was the players who made things difficult for Webb in that match.

(Many thanks to the organizers and especially to Mr Shane Neubronner of Fulford PR, for letting me know this eye-opening event and the surfacing of this entry)

FOR MORE PICTURES OF THIS FORUM, PLEASE CLICK HERE.