Before the KICK-OFF
Spoke to some of the crowds at the stadium before the kick-off. 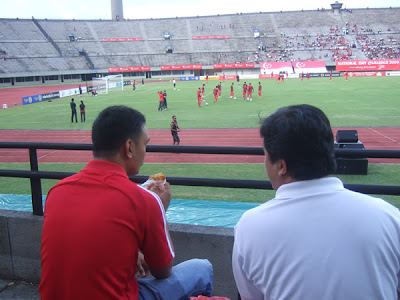 Some pictures before the kick-off 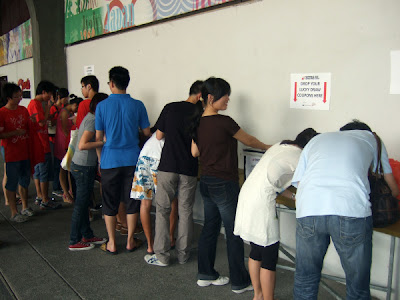 Wonder anyone of these folks got the ultimate prize? 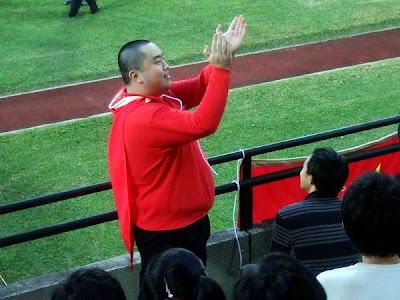 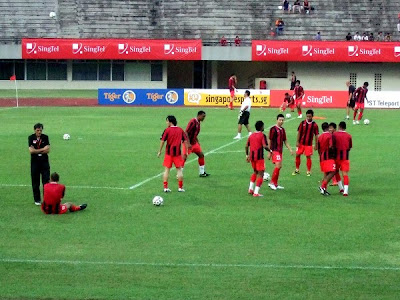 The Singapore national team warming up before the kick-off. 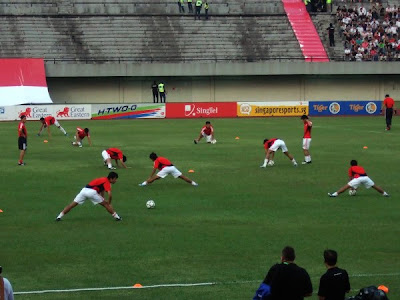 The Chinese team warming up before the kick-off.
The short take of the game. 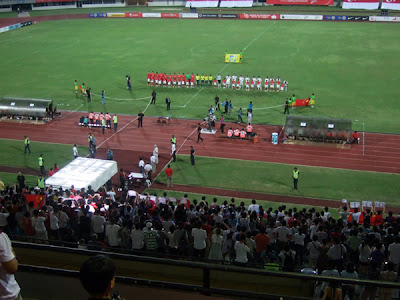 The teams lining up before the match.
It doesn't matter Singapore took the lead in the seventh minute through skipper Noh Alam Shah, after he headed home from a Rosman Sulaiman's cross with a Shahril Ishak's short one from the corner, it was the Chinese who were dominating much of the ball play in the first half. 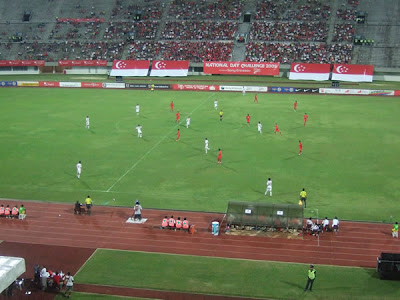 The Lions midfield seems unable to cope with the Chinese attacks
While the visiting side may not look as potent as they appeared to be, but their slick ball passing and movements had caused some headaches for the Lions' backline, they were lucky to able to hold the visitors untill the 27th minute when Yang Hao levelled the scores from close range. 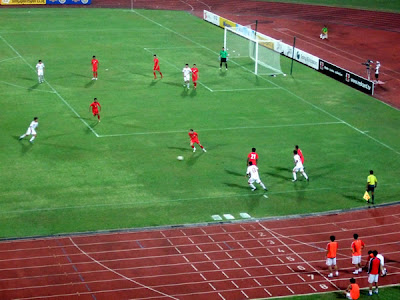 And contented themselves being an "absorber" large part of the game.
Still not much improvement for the Lions as the hosts struggling to string up a decent performance upfront by losing possession unnecessarily, while the defence contented themselves as an absorber for the never-ending Chinese attacks which were guilty on several occasions not to seize opportunities when given.

Some pictures from the post-match press conference 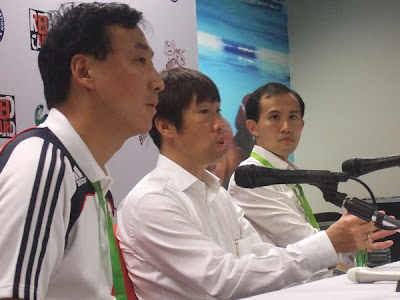 Gao Hong Bo, China coach (pictured middle, above)
"I think we prepared well, but the game itself could have been more exciting." said coach Gao.

"And I told my players before the start of the game, regardless who are the opponents we must take our game seriously." he said

"However, I shouldn't take it too seriously about this result, as the most important thing is to provide entertainment to the crowds."

"Although tactically, I'm not pleased with several aspects of it." added the former Tiong Bahru striker. 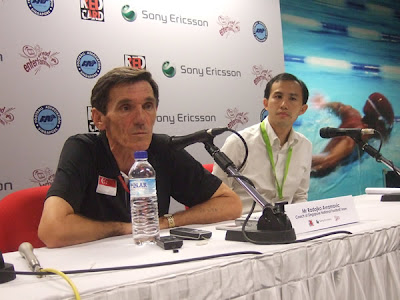 Radojko "Raddy" Avramovic, Singapore coach (pictured left, above)
"I did not have the best players due to injuries, but that's something we have to cope with it and generally, I'm satisfy with the team's performance" said the 59 year-old Serbian coach of the Singapore national team since 2003.

"We could have done better in keep possession, which is generally our weakness and we missed a few opportunities in the second half when we would have scored the second goal." he added.

"I'm happy with their attitude."said Coach Raddy when asked if he was pleased with the new players (ie: Itimi Dickson, Fazrul Nawaz etc.) he brought into this match.

"They had tried their best and that was what I asked them to do like Itimi, who was out for a long while and for Fazrul who is still not fully fit for international level." commented Coach Raddy. 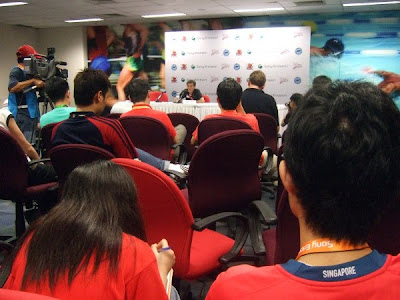 The post-match press conference
R Sasikumar, the match organizer- RedCard Pte Ltd
"I'm disappointed with the turnout today as we targeted a crowd of 25,000 for today's match." said the former national defender whose company recently organized the A-League's new boys, North Queensland Fury match against Tampines Rovers in late May. 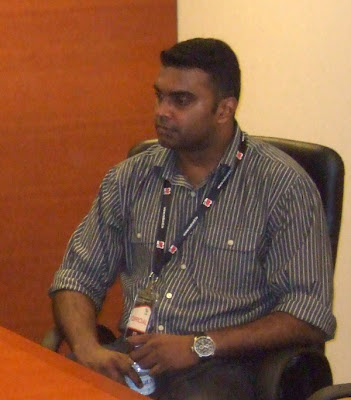 Match organizer - R Sasikumar (file picture)
"Probably, factors like the infrastructure-wise and the scheduling of the match might have some fans unable to turn out, which proved to be a challenge for us in organizing such games in the future."

"But at the end of the day, it's all depend on what we want to achieve from these events as the whole idea to get local clubs and the national team to play against top quality opponents." said "Sasi" as he's commonly called in the local football fraternity.

When asked if the recent publication of a newspaper article questioned the "steep" ticketing pricing which could have determined the poor turn-out.

"I rather disappointed with that article as they seem to contradict with another that appeared on the day before." he lamented.

AFTERTHOUGHTS
It all depend on how we look at it if this event is a success or still a long way to go. 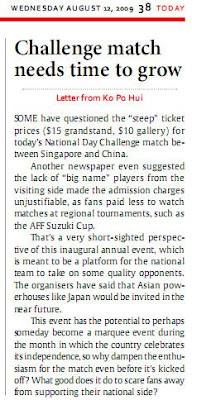 Like what I mentioned in the letter (above) I wrote to the "mainstreamer", this event has the potential of become a marquee event for the month of August, and we just need some time to see it grows.

While we may not expect the European sides to come down at this point of time each year due to the start of their domestic season, however, this doesn't mean there's not other quality teams we can invite.

Also, factors like the availability of the teams, the venue are some of the factors being highlighted are the problems the organizers be facing when staging this event in future, so at the end of it we cannot please everybody.

One of the big turn-offs was the performance of the emcees of the game were rather mundane and failed to hype up the atmosphere that was supposed to fun and merry-making, no thanks to their read-from-the-script way of presenting (what happened here?).

Just being honest on this point as blasting the national day songs through the PA system wasn't enough to get the fans involved (Where were the cheers or are they too soft that I can't heard from my end?).
Many thanks and appreciations to Mr Jonathan Leow, Ms Carolyn Soh and Ms Fadilah Amir Hamzah of SPRG Pte Ltd for making this blog entry possible.
logged down by Ko Po Hui at 01:15:00