Welcome back an old friend... 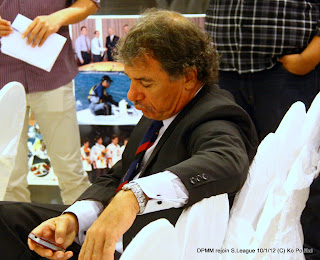 There he was sitting on a chair inside the venue hall almost unnoticed when I first arrived at the Singapore Sports School in Woodlands (which I nearly lost my way because of a misguided information of an apps on my phone).
You see Brunei DPMM coach Vjeran Simunic (pictured above or left depend on your browser setting) would normally tucked in his trademark attire entirely in black colour and top off with a black baseball cap embossed with the DPMM logo on match day.

Perhaps that was the reason I didn't notice him in the first place given that etched description in my mind.

Given an ad-hoc assignment upon receiving a phone call I got down to work immediately and had a chat with the Croatian coach who was decked in full business suit with coat and tie.

During a short chat up while waiting for the arrival of the guests of honour, the 58 year-old shared with us what he was doing after the DPMM was forced to exit out of the S.League because of the FIFA ruling.

"I was coaching in Vietnam for this club called Ho Chi Minh FC, and because of the promise I had with the Crown Prince of Brunei (who is also the DPMM chairman) they (Ho Chi Minh FC) allowed me to exercise the release clause in my two-year contract with them." said coach Simunic who left Vietnam to return to Brunei months ago.

Despite away from the region, the Croatian coach kept himself informed with the local happenings via the internet and through his contacts in this part of the world like ex SAFFC midfielder Ivan Jerkovic who had since re-signed for DPMM.

With the stagnancy as the result of the ban that was only lifted last May, coach Simunic knows that the tough challenges ahead for his squad to catch up with the rest, but he is "pleased with what he seen so far" and hope the hard works would eventually paid off.