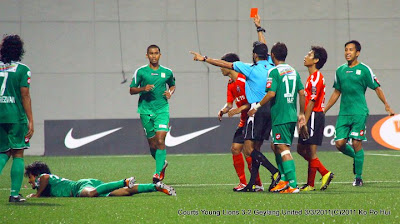 (Picture above) The "sending off" that triggered the incident
SINGAPORE, 15 March 2011: The FAS Disciplinary Committee convened on Tuesday 15 March 2011 with regard to the charge against Courts Young Lions Technical Director Slobodan Pavkovic.

Pavkovic had been charged for breaches of misconduct which brought the game into disrepute during the Great Eastern – YEO’S S.League match between Courts Young Lions and Geylang United FC at Jalan Besar Stadium on 3 March 2011.

Having investigated the incident and having considered all the relevant facts and circumstances, the Disciplinary Committee came to the following decision:

(i) Pavkovic, who admitted to the charge, was found guilty of the charge. After much deliberation, the Disciplinary Committee decided that the punishment meted out by FAS – a touchline ban for the rest of the Great Eastern – YEO’S S.League season and a fine of $10,000 – is sufficient.

Disciplinary Committee Chairman K. Bala Chandran said: “The FAS Disciplinary Committee does not condone any physical abuse or verbal abuse of referees. Pavkovic pleaded guilty and admitted to the charge unreservedly. We have taken into account Pavkovic’s mitigation and we believe that the punishment meted out by his employer FAS is sufficient in this instance. We do not think it is necessary to add any further punishment.”

Pavkovic said: “I would like to apologise again for my misconduct and bringing the game into disrepute. Moving forward, I undertake to conduct myself professionally at all times.”