Some worthless relic from the past....

I must apologise for the recent lack of updating due to the fact that there are some tidy chores in my house for the upcoming repair works that's gonna take place in days to come.

As such, I might see myself being tied up for some packing and clearing up some stuff along the process. The last time round saw me unearthed the two precious TNP centerspread of the Malaysia Cup era and now here are some relic I discovered during my clearing out...

OLD MATCH TICKETS
I think match tickets are something just like a piece of stamp that reflected well on something that happened in the past. On and off, I would always get an email from a Belgian ticket collect asking for used ticket of the those Lions' matches.

Unfortunately, these used tickets below are not to be given away at any price for its significance. 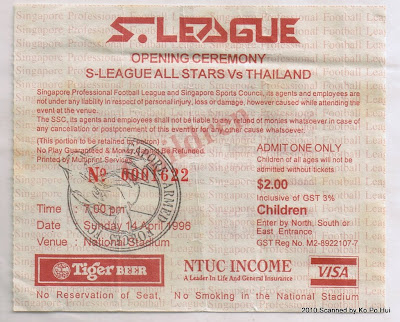 (Pictured above) This ticket was the admission slip to the S.League Opening ceremony on 14 April, 1996 at the National Stadium where the Thai national team was in town to pit against a S.League All-Star Selection.

In the end, it was the guest that won the match and the ceremony was graced by the then Prime Minister, Mr Goh Chok Tong.

Noticed the SAFFC logo imprinted on the slip, this ticket was purchased at Jurong Stadium (the former home ground of the Warriors, with aid from an ITE classmate). 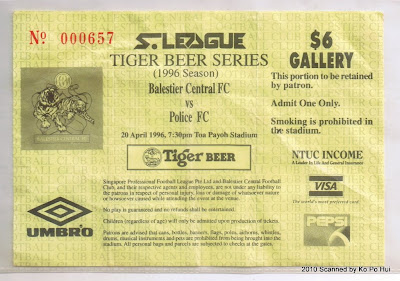 On 20 April 1996, the inaugural S.League season kicked off at various venues with Balestier Central took on Police FC at the Toa Payoh Stadium.

I was lucky enough to see the first ever S.League goal scored by Bosnia striker Esad Seijic (who incidentally scored the league's first ever hat-trick) against a Brazilian-fronted Police side, who eventually won the match 2-1. 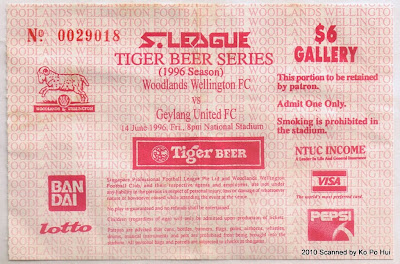 If I'm not wrong, this match dated 14th June 1996 WAS NOT the match that recorded the highest-ever attendance in the league history, it was the returning fixture for the Rams-Eagles match at the National Stadium.

Despite purchased the "Gallery" tickets, I and a group of pals managed to sneak into the bench-section of the Grand Stand. 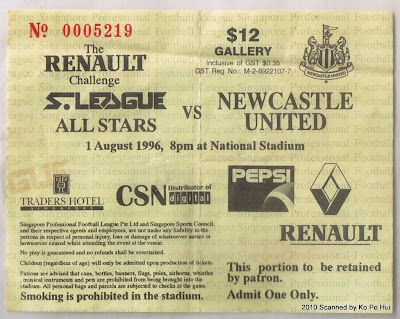 Think about it, it was only $12 then to catch an EPL side to play at Kallang (as compared to $88 to see Liverpool last year)!!

Fans got to see David Ginola (and we are STILL waiting for Etoile to fulfil their promise), Peter Beardsley of the Magpies, while a certain Alan Shearer was here as well (but the then manager Kevin Keegan wanted Shearer to be featured in his first game as a Newcastle player at Newcastle and let many Singapore fans disappointed). 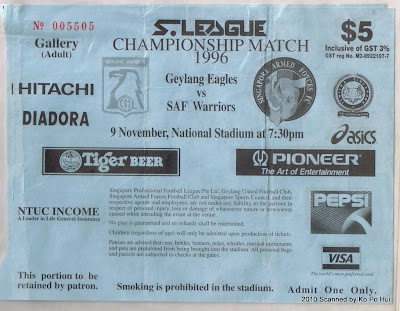 9th November 1996 was a date to be remembered in the history of the Singapore football, as Fandi Ahmad climbed up to the podium to receive the brand new S.League trophy and declared Geylang United as the first ever S.League champions after beating SAFFC in the Championship match at Kallang.

FIXTURE CARDS
Here are some rather handy-size fixture cards for reference in the past.

I'm not sure if it's worth any effort to print them nowadays, since the fixtures frequently alter that I do really lost track at times.

Nonetheless, these cards made good souvenir and collectible items... 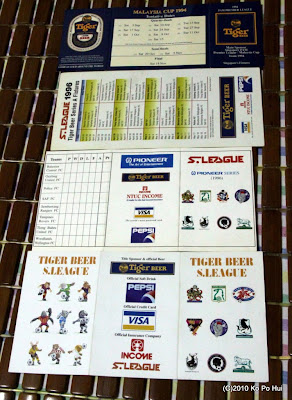 (From Top to Bottom) 1994's Singapore's fixtures in the Malaysian League, follow by the "Tiger Beer" Series and the "Pioneer" Series of the inaugural season and 1997 season saw the league starting off with 9 (instead of the supposedly 10) with the inclusion of Jurong FC.

The debut season modelled the J-League format for having a two-series format and a decider match to determine the Champions, unfortunately, after the highly-successful "Tiger Beer" series, the follow-up "Pioneer" Series was all but a disaster (as far as I concerned) with dwindling interest, probably because local fans were not accustomed of having such weird league format.

Therefore, the following season became a "single-series" format with the inclusion of Jurong FC and Landmark Marine Castle, however, days before the season started the latter pulled a shocker by abruptly withdrawn from the league.

Citing "no ready" as the primary reason, although weeks before that they allegedly tried to lure Egmar Goncalves from Police FC failed after the Dragons lodged a complaint against such dealing "behind the doors".

(Facts detailed above are based on my recollection and truth knowledge, please feel free to correct any factual mistake, thanks)
logged down by Ko Po Hui at 21:47:00