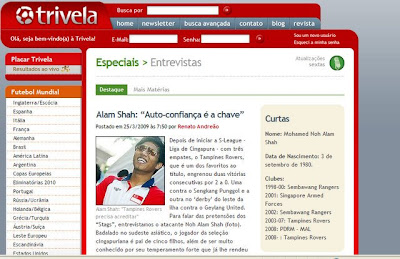 Once again I got an email from my Brazilian friend, Renato Andreão.
This time round, Renato conducted an interview with Tampines Rovers star striker Noh Alam Shah.

In this interview, "Ah Long" shares his thoughts with Renato on his ambitions for this season and gave his opinion what could have led the current trophy drought at Tampines, despite at a time boasted one of the potent striking line-up in the league.

And some "touchy" issues in which Alam Shah also gave his slight insights on his past, the national team and his take on the Asian Cup qualifier opponents likes of Jordan, Thailand and Iran.
http://www.trivela.com/Conteudo.aspx?secao=44&id=20411 (again in Portuguese.. so you may need "Google Translator", unless you read Portuguese.)

(P.S: Many thanks to Mr Renato Andreão for conducting this interview and allowed me to have it post up here..)