In the Stands of the Heartlands to see Lions triumphed 2-0... 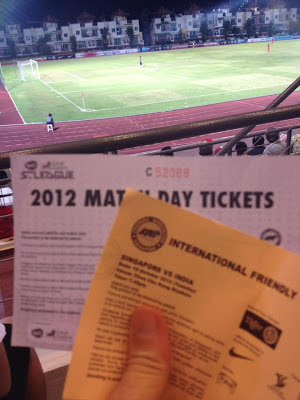 Rather than to be on the sidelines with the photogs, I joined the crowds at the stands of the Choa Chu Kang Stadium to watch the match between Singapore and India.

The Lions walked away with a 2-0 win with goals from Khairul Amri, who came on as a replacement for Shi Jiayi, in the closing stage of the first half (barely a few touches before he found the net!).

SAFFC's Fazrul Nawaz doubled the score minutes after the restart with a close-range effort off a cross from evergreen Aleksandar Duric on the right.

It was noted that the 42 year-old striker drifted himself sporadically into a deeper position as a makeshift defensive midfielder or a quarterback in the second half.

Therefore, not surprise at all to see the man, whose international score-rate before than Lionel Messi, struggled to stamp his mark in an unfamiliar territory.

When asked if it was pleasing to see Amri and Fazrul scoring instead of relying on just Duric, the Lions' assistant coach Aide Iskandar shared his thoughts with the media after the game.

“Definitely, its always pleasing to see different players score, not only Aleks. He (Duric) did well today as well, and Amri did very well when he came on. It’s been a long time since I’ve seen him play this well for Singapore, and Fazrul’s goal is pleasing as well because it’s his first after a long time." said coach Aide

“I think the boys did well, although I felt it wasn’t the best first half we had. In the 2nd half we did better. It was good to see Amri scoring and assisting, it’s a good evening for us and hopefully we will pick up from here in preparation for the AFF Suzuki Cup,” added the former national skipper.

Still, it was well-attended match in the HDB heartlands and hopefully, the residents would appreciate the Lions' presence should they need to continue their prep on the natural turf in the near future.

(Quotes extracted from the official media release by FAS after the match, pictures depicted belong to the blog owner, unless credited to the originating source accordingly.)
logged down by Ko Po Hui at 23:44:00

Email ThisBlogThis!Share to TwitterShare to FacebookShare to Pinterest
Classifed as: Friendly, Singapore Cup