The man they called the "White Pele" never failed to reiterate his opinion on having game to be played on artificial surface after made known to the media a day earlier.

"To me personally, I think good football should be played on natural grass and artificial surface shall be used by small children in training instead." said Brazilian legend Zico, the newly appointed Iraqi national coach at the pre-match press conference of the 2014 World Cup qualifier match between Singapore and Iraq.

Despite his unpleasantness over the choice of playing surface at Jalan Besar Stadium, coach Zico added he still respects the decision undertaken by both FIFA and AFC for this match.

Beside the pitch, coach Zico also voiced his concern over the scheduling and the grouping of the qualifiers fixtures.

Said the former Flamengo superstar:"Perhaps, the organizers should be looking into how they can group the teams based on their (approximately) region instead of the present format.

"The distance involved in the traveling from Iraq to Singapore had made some of my players tired, as it was 30 hours from there to here." added the man who last visited Jalan Besar in 2004 as the Japan national coach. 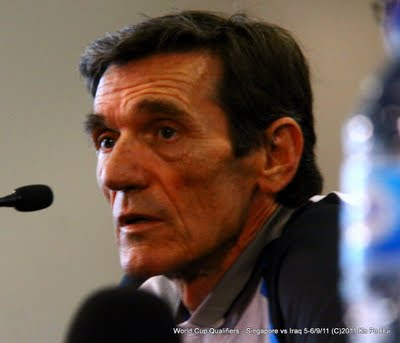 Yet the ultimate agenda for both coach Zico and his Singapore counterpart, Raddy Avramovic (pictured above) is to gain maximum points out from the match tomorrow.

Having both lost their opening fixtures last week, it is "do-and-die" battle for both Singapore and Iraq.

"My team lost many chances in the last game against Jordan, while they had two chances and they scored on both occasions.

"I believe it was because that was the first time after long period that the team played their home game in Iraq and the players felt the pressure to perform in front of the home crowds, but for the tomorrow's game the most important thing is to put the ball into the net." added the 58-year old.

Echoed his much illustrious counterpart's thought, coach Raddy (pictured above) agrees the significance of the second match of this group qualifiers especially after that heartbreaking defeat to China last Friday.

"It was very difficult for the team after that game against China, as emotionally the team got affected but we tried our best and we are looking forward to our next game against Iraq which I hope it will be good game tomorrow." said the Serbian coach during the press conference.

Coach Raddy also gives an update on the players' condition by revealed that both China-born duo of Qiu Li and Shi Jiayi still having diarrhoea since returned home from Kunming with 'keeper Izwan Mahbud will be ruled out for the match following his ankle injury sustained during the match against the Chinese.
logged down by Ko Po Hui at 15:48:00