When honour become a liability

By Ko Po Hui September 17, 2011
Based on their line up in their league fixture against Albirex Niigata (Singapore) that featured the likes of Lionel Lewis, Shi Jiayi, Qiu Li and Juma'at Jantan, one question floated into my mind and made me wonder if these Home United's Lions (and the rest from other teams in the S.League) felt that national duty is become a liability for having to juggle their club commitments after such a hectic international duty?

Don't get me wrong, it's always a honour to play for national team but the welfare of these fatigued Lions must be taken care of avoid burnt out and getting themselves injured unnecessary in time like this when their club's priorities are equally important. 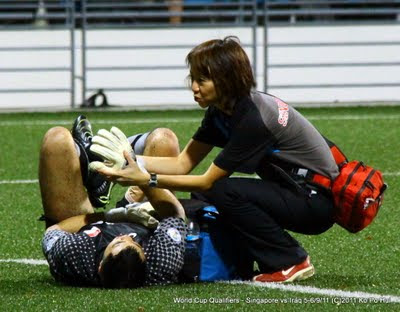 After all, out of those above-mentioned we already had a few of them reportedly having some physical "un-well being" like Lionel got himself injured (after just returned from an adductor injury) in the loss against Iraq (pictured above receiving treatment ) that prompted him to reconsider his international future after that game.

Saddest thing that would be no players see it an honour, but a liability to play for the national team if such scheduling remains "status quo" and things remain 'volatile' as it is, while the effort of those who fought for the country gone unappreciated.