The heat is on for the "Causeway Derby"

Rain came unexpected when I reached Tanjong Pagar area for the pre-match press conference for the World Cup Qualifier between Singapore and Malaysia aka "Causeway Derby" (being the fact that the island republic is connected to the Peninsular Malaysia by the bridge known as the Causeway).

It is a match that would normally guarantee a "sell-out" given the rich footballing heritage that bond these two lands since the colonial times.

To the Singapore team, it's an examination that coach Raddy Avramovic and his Lions since the .... (if you read the papers of late, I shouldn't repeat here) have to take to see any improvement being achieved since then.

To the Harimau, it set a stage to reaffirm their regional supremacy after winning two of the most important titles this part of the world - the AFF Suzuki Cup and the SEA Games gold medal.

With the two recent friendly matches against English powerhouses - Arsenal and Liverpool in front of huge crowd at the 80,000 capacity Bukit Jalil stadium, it is undoubtedly the Malaysian are well-prepared for this fixture. 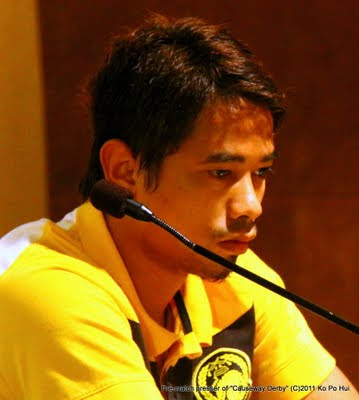 A view that is shared by Malaysian skipper Safiq Rahim (pictured above) during the presser, when he said:"Playing against top teams like Arsenal and Liverpool definitely help us in our preparation against Singapore."

"But in game like this, it also about capitalize the opponents' weakness and win the game" he added.

While his counterpart, Lions' skipper Shahril Ishak (pictured below) hopes certain factors will give his team the advantage in tomorrow's match. 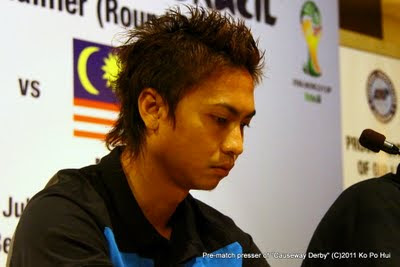 "We have to utilize a lot of advantages we have in this game, such as playing on the artificial surface, which I hope my team can make full use of the familiarity of it.

"After all, it'll be a good match as we are expected a full house which will be exciting to play in." said the Medan Chiefs midfielder.

While both coaches - coach Raddy and Datuk K Rajagobal highlighted the significance of having the two sides playing each other.

"It's great to have match like this, as it helps Singapore to do better in Asia and I am looking forward to more games like this in the future." said the Serbian tactical who led Singapore to two successive Tiger Cup victories in 2005 and 2007.

Echoed that similar sentiment by Malaysia coach, Datuk Rajagobal opined:"There's a lot of history in Singapore-Malaysia game that it's never an easy game to play and it's a game I am looking forward to and hope to be an interesting one."

INFORMATION OF "LIVE" SCREENING AT PEOPLE'S ASSOCIATION LAWN
Due to the sell-out of this much anticipated match, the Football Association of Singapore (FAS) together with its partners, namely the People's Association (PA), Singapore Sports Council (SSC), Singapore Pools and cable television provide Starhub had come together to host a ‘live’ screening of the match between Singapore and Malaysia on 23rd July at 7.30pm at the PA's HQ lawn (pictured below).

"Due to the overwhelming response, and the growing interest in this match between Singapore and Malaysia, we have embraced the feedback from the fans and in the past few days, have been working alongside our PA friends to provide an alternative viewing platform for supporters to comes together to cheer on the Lions as they take on Malaysia”, said FAS president Mr Zainudin Nordin in a media statement.

The entry to the People’s Association lawn would only be open to public at 6.30pm, organisers would like to advise the public not to drive but to take public transportation i.e. bus and train. The nearest MRT station is Lavender and Farrer Park MRT stations.

As Jalan Besar Stadium is expecting a 6,000 sell-out crowd and the carpark facility is limited within the premises. The nearest public carpark is located at the ICA Building, City Square Mall.

In anticipate of huge turnout at the "Causeway Derby", all essential safety and security measures had been tighten up according FAS.

"We have had multiple security meetings to ensure that things will run smoothly on match-day and security measures that will ensure that the event goes according to plan." said FAS spokesperson Kelvin Leong in reply to the query from this blog.

Beside its normal deployment on typical match day, it is made known that CISCO officers will be roped in beef up the security during the match.


Public is also advised not to bring in prohibited items such as Flags on metal / wooden poles, alcoholic drinks, Flares and Fireworks.
(Details and information of the live screening extracted from the media information by the Football Association of Singapore)

REST OF THE DAY'S PICTURES CAN BE FOUND BY CLICKING HERE.
logged down by Ko Po Hui at 15:34:00