Was at the appreciation dinner hosted by the organizers of the recently concluded 23rd Canon Lion City Cup at Fika, which is located around the Kampong Glam area.

Making their presence at the venue were the two NFA squads - the U15 and U16 teams (pictured below) who finished third and runners-up spots respectively in the tournament. 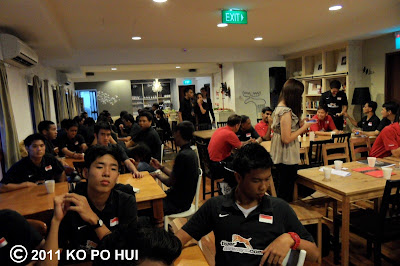 As a commitment pledged by the title sponsors, Canon, before the tournament, a contribution of $13,000 was donated to the National Football Academy for the development of these two teams.

The finalized amount was the result of total number of goals scored by the two teams that tallied at 13 goals (nine by the "Baby Cubs" - U15, four by the "Little Cubs" - U16) during the tournament.

Many thanks to the organizers for the invitation to the dinner and of course for mentioning both Arief of LionsAllTheWay and myself during the closing speech by Mr Alvin Yeo, the emcee of the night (deeply appreciated).
logged down by Ko Po Hui at 22:49:00

Email ThisBlogThis!Share to TwitterShare to FacebookShare to Pinterest
Classifed as: lion city cup