That special kind of magic... 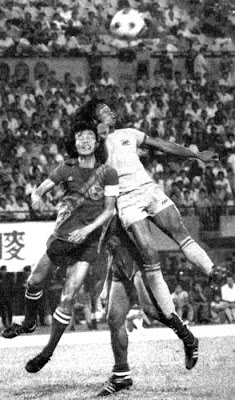 Selangor's skipper "Towkay" Soh Chin Aun (left) in an aerial duel with Singapore striker Arshad Khamis back in 1976 at the National Stadium.
Only those who had been through that era are probably the only guys who would appreciate that unique footballing rivalry between Singapore and Selangor.

Unique in a sense that the result of this rivalry is not because different in social class (as in Argentina's elites based River Plate and working class linked Boca Juniors) or close-town rivalry like AC Milan and Inter.

Instead comparison of this contest was liken it to that between English titans Liverpool and Manchester United.

All four earned their bragging rights of their own for having accumulated more honours than other teams on their lands since their founding years, so whenever matches involved the quartet it'll always be a crowd-puller.

Like in 1993, despite languished in the lower-tier of the Malaysian League then, both Singapore and Selangor entertained a packed National Stadium in this second division clash.

Those swinging 70s days of Quah Kim Song, Samad Allapitchay, Dollah Kassim feuding their nemesis of the likes of Mokhtar Dahari, Soh Chin Aun and Santokh Singh, we are still savouring them, don't we?

It was a big match in those years when you talk about Singapore playing against Selangor, as everybody wants to see and know the result.

You see, for the Singapore players, it was playing for the national team, whereas for Selangor, they comprised most of the Malaysian national team.

So it was like Singapore playing Malaysia who were having great players like both late Mokhtar (Dahari), R Arumugan with guys like Santokh (Singh) and (Soh) Chin Aun.

I consider the 1977's Malaysia Cup two-legged semi-finals against them as my most memorable moment because we won on both occasions, home and away before we went on to beat Penang in the final. 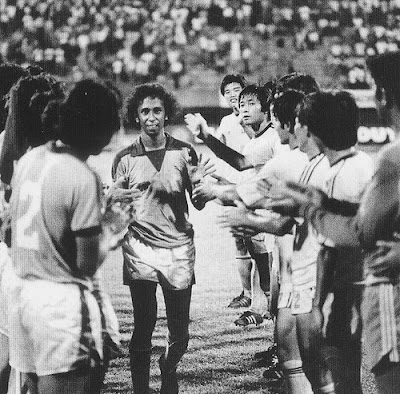 (Picture credit: Mr Lam Chun See of Good Morning Yesterday)
The 'Gelek King' of the 70s - Mr Dollah Kassim (pictured above in the middle) who was one of the scorers in that 2-1 victory over the Klang Valley giants in 1977's Malaysia Cup first-leg semi-final played at the National Stadium.

We had so many good players from both sides that it was like a Cup final whenever we played against Selangor.

The likes of those players of Samad (Allapitchay), Mat Noh, Dollah (Kassim), Quah Kim Song, Mokhtar (Dahari), Santokh Singh had got everybody excited.

And it was our midfield that boasted the likes of Zainal Abidin (Manan), M Kumar and Gulam Mohamad who hold the key in those matches when we beat them. 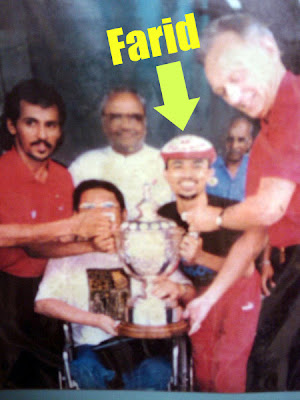 Farid (as depicted above holding the Malaysia Cup, while flanked by then coach Douglas Moore and midfielder Malek Awab), a fan who used to queue overnight for tickets at the National Stadium just to see his heroes in action in the 70s.

SINGAPORE VETERANS
(to be featured against Selangor Veterans)