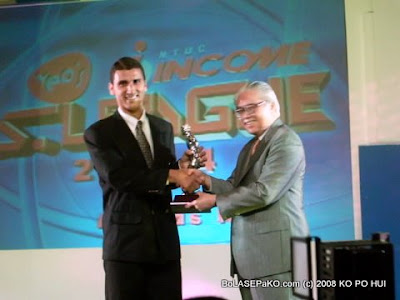 This is only picture I have of Egmar, as Renato wasn't able to get a recent one from Egmar.
Ever wonder what's been going on with former Home United and national striker Egmar Goncalves, after he left Singapore in January 2007?

With the help of Mr Renato Andreão, a journalist with "trivela.com" - a Brazilian soccer news portal, I managed to track down the former ace striker of the Protectors.

Below is a list of Q & A, which with the help of Renato, here's what Egmar has to share with us how is he doing now since he left Singapore.

Q & A with Egmar...
It's been quite a while we last hear from you, after you returned to Brazil. So are you still playing actively? As what I heard you been playing for some amateur teams since then.

“After I returned from Singapore in 2007, I played for a club called Desportiva and follow by Rio Branco, a year later, but I decided to hang up my boots because I found that infrastructure and administrative-wise the standard is too amateurish.

Currently, I run my own soccer academy in Espírito Santo State, where I'm staying now and the kids I coaching now are completing in ‘Copa Agazetinha’, a league for kids and teenagers in this part of Brazil. ”

It was mentioned in the papers in Singapore years back that you already relinquished your Singapore citizenship, it must be a tough decision then, do you ever regret that decision? If yes, why? OR if no, why?

“I always stated clearly beforehand that 'once my playing career is over, I'll return to Brazil for good', and since I'm back in Brazil now so there's no point of retaining the (Singapore) citizenship.”

Beside you, Mirko Grabovac also followed your footsteps and returned to his native Croatia, citing financial sustainability, so was that the main reason behind for you to give up the Singapore citizenship too? As it was mentioned in the papers then that salary was one of the reasons why you decided to leave Singapore, true?

“No, I´m proud of my career in Singapore. I never had any salary issue .

I left Singapore because it's been 11 years since I came over to play in the S.League, also my children were yearning to return home as what my daughter once said,'Oh, daddy, you always tell me that we will return to Brazil, but it never happens' and thought then that it was time to leave Singapore.”

In your opinion, what can FAS and the clubs do to resolve this issue, in order to keep naturalized players in Singapore for long term?

“I think the relevant bodies (i.e.: the FAS and the clubs) should provide “post-career” employment to those (naturalized) players, once they retired from playing.

They can be either in a position of that as a coach, manager etc.

Take an example of Aldair (who was part of the Brazilian team that won the World Cup in 1994), despite that he's not longer with AS Roma, he still maintained contact with the club and as for me, however, I have not heard anything from my former club, Home United or FAS after I left. ”

It's been quite a while you left Singapore, tell us what do you miss Singapore the most (football-wise and non-football wise)?

“It was a difficult period for me when I first came back to Brazil from Singapore.

Once I looked at my trophies at home and it was hard to believe, initially, that my playing career was coming to an end, at times I often dreamed of scoring goals for Home United in my sleep too.

'Mani' (Home United's skipper S Subramani) once emailed me and said,'We would like to have you here again, is missing something during training sessions' as I was always happy, talking joke to other players during the training sessions and (national 'keeper) Lionel Lewis gave a pair of boots as a gift.

I love my ex-teammates and Singapore. I lived 11 years there.”

You spotted Peres de Oliveira and recommended him to Home United, so any chance of seeing someone like Peres who you can recommend to S.League now?

“No, I don´t have many contacts. The only player I recommended was Rivaldo da Costa, who played for Geylang (in 2008) after one of their directors enquired about him from me, before signing him.”

Honestly, I don´t know why just Peres and myself being the only ones from Brazil able to stay for long (playing in the S.League) but I always gave 100% when playing for Home United during my years there.

I love that club, all that I have today is because I played for Home United.”

“Yes, I look the official website sometimes. Just that. I´m sad because SAFFC been winning the league title.”

Last question - Do you have anything to say to Singapore football fans, who been wondering you are doing now?

“You will be always and forever in my heart. ”

Thank for the interview, the memories, Egmar and we wish you all the best... and also to Renato, for the call he made to Egmar in conducting this interview, thank you.
logged down by Ko Po Hui at 21:04:00