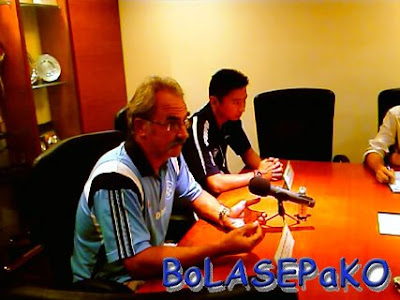 Coach Gerd Zeise of New Riadant addressing the media, with his counterpart, SAFFC's Richard Bok on his left
Coach Richard Bok refused to blame on the fatigue (of their last game against Super Reds) that drained his players after their AFC Cup fixture against New Radiant of Maldives, that ended one all at the JBS.

"Credits to New Radiant" as the SAFFC coach lauded his opponents' performance, while facing an eager media that were ready to grill him.

"They looked more energized and the desire to get something out of the game, as they promised on Monday (post-match press conference).

"We had created so many chances that we can't put it away" said the Warriors coach.

Earlier on (I was late into the press conference room), the German coach of New Radiant, Gerd Zeise attributed the result of tonight's result to the altering of the tactics as he explained, when asked about the night's outcome as compared to last time the two met in Male.

Can't really scribe much out of the visiting coach, as it seems always the case that whenever a S.League club or the Lions are playing locally, most questions would targeted at the local team's coaches, despite the presence of some Maldivians journalists (they were also present when Victory SC were here weeks ago).

I can't help but have that feeling that sometimes visiting coaches were being neglected, although, Coach Zeise did shared with us how he felt about the referee's performance in a jest manner.

(P.s: typing this blog on my DELL lappy, my only means to the WWW now, goood progress is underway to get the new desktop ready, hopefull soon.. Good Luck to me :D)
logged down by Ko Po Hui at 23:16:00