It was said that when a team don't perform well in one campaign, doesn't mean they can't in another.

Take the case of Geylang United.

Struggled at the bottom end of the table currently (to be precise, they are one spot above wooden spoonists Sengkang Punggol), nobody give them a chance at all to the Eagles when they turned out at Jurong East earlier this evening. 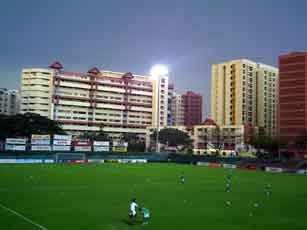 With the sky looked really that gloomy before the start of the game, one really fear if the Eagles can sustain the potential onslaught from their host, after all, the Jurong East stadium had not been a happy hunting ground for the Geylang Eagles.

Geylang was the first team to pay the visit to Albirex's maiden home game years ago.

Then, the men in green thought they had the game wrapped up, only to see the Japanese came back strongly and reversed the tie to thrash them heavily.

Fortunately, for the fans who turned out at the ground, they were given a feast of entertaining football, probably the best match of the season so far.

Sad to say that, despite the brave effort by the Eagles, they still crashed out of the Singapore Cup.

However, the gusty display and the tactical switch of Geylang shown in this game, could signaled better to come that will help them out of the pit bottom.

Once again, thank you Geylang - for the effort put in.