(P.S: If you access this site via "come.to/matchpix", please click the "Facebook" icon after you click "HERE" when you want to view the album as that will redirect you to the album, thank you)
First "LIVE" TV shot of the season and glad to meet up with the "guru" before he thought I disappeared.

The set might appeared to look "dark" as I stick to 1/400 for all these shots with the usual "default JBS setting".

Harimau Muda's Wan Zack Haikal proved to be why he could the hot contender for the "Young Player of the Year" with his industrious rate on the flanks and duly rewarded with his opener (and a yellow too) before the end of the first half.

Geylang did unleashed their trump card in Amy Recha but it was rather late for him to show us what he's capable.

PLEASE CLICK HERE TO SEE THE REST OF THE MATCH PICTURES
Sorry that there is a typo on the watermark on the shots (must be the toil taken on me for the past few weeks at my workplace).

Anyway, it was nice to see Therdsak Chaiman back in Singapore after he left SAFFC years ago.

He still has not lost any of that cutting edge that he set up the two goals that helped Chonburi to beat Home United 2-1.

Home United will be without Qiu Li for who collected an unnecessary yellow that ruled him out for the next round fixture in Middle East.

PLEASE CLICK HERE TO SEE THE REST OF THE MATCH PICTURES
The Stags, indeed, made things difficult for themselves (as what coach Steven Tan said after the game) when they conceded the first goal of the game.

They managed to turn things around before half time when they made it 3-1 with quick succession goals in the closing stage of first 45.

The Khmers refused to back down and tie the game at 3-3 and only to see Alex Duric scored the winning goal in the end.

First night time shooting at Clementi at ISO 3200, 1/320 but if I have the power to decide I would like to ban teams from wearing dark-colored outfit. 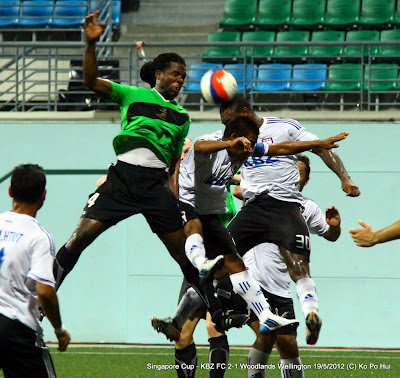 "Their mind (Woodlands' players) just switched off when they stepped onto the field!" uttered Woodlands Wellington assistant coach Clement Teo in the post-match presser after saw his side knocked out by Burma's KBZ FC in the RHB Singapore Cup.

For the second time on a roll at JBS, the crowds witnessed another elimination of a Singapore side by a invitees squad after Geylang United were done so by LM Sparks of the Philippines on the previous night.

With this 2-1 outcome, KBZ FC(led by former Lions coach Mr PN Sivaji) will meet the Pinoy in the next round of the competition. On the side note, am I glad to be back at my "favourite" spot of JBS to shoot.

PLEASE CLICK HERE TO SEE THE REST OF THE MATCH PICTURES
The Lions are currently on a centralized training session for the upcoming June friendlies against Hong Kong and Malaysia over the next three weeks.

Opportunity to push up the world ranking aside, what probably matter most is to perform well in the year end's AFF Suzuki Cup ultimately.

PLEASE CLICK HERE TO SEE THE REST OF THE PICTURES
logged down by Ko Po Hui at 23:59:00