Sorry... I was not concentrating..

As I was filing my match report for the earlier 3rd-4th placing match between Home United and Tampines Rovers that I wasn't paying much attention during the League Cup final match between Hougang United and Albirex Niigata (Singapore).

But what I did realize was Canadian winger Jordan Webb was the man of the night for the wrong reason when he came so close to end the trophy drought of the under-achievers in the dying moments of the second half of the extra time, before agonizingly saw his spot-kick saved by White Swans' keeper Yoshito Matsushita that gifted the Japanese their first ever title since joining S.League in 2003.

According to one of the tweets I gathered Webb was inconsolable that he was not present at the prize presentation. 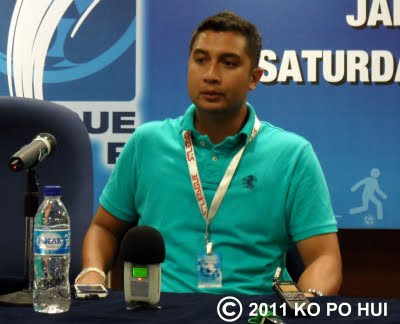 At the post match press conference, the Cheetah coach Aide Iskandar (pictured above) credited his boys' performance as "well-disciplined" which he hopes to carry forward to their remaining campaign.

"Both teams started cautiously and it was never easy for us having played four games in ten days, but it was an entertaining game that unfortunately had to settle on penalties.

"The boys did everything in this game and now we just have to look forward to the Singapore Cup, also their (Albirex) win tonight shown the quality they have that they aren't here to make up numbers and this is best Albirex side I seen in years." said the former national skipper at the end of the day lauded his opponents' achievement. 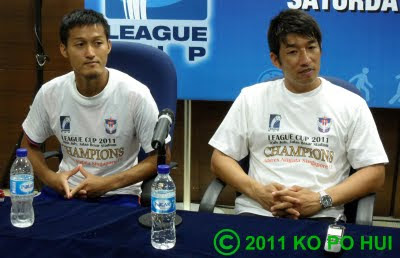 Starting his session at the post match presser, Albirex coach Koichi Sugiyama (pictured above right with skipper Shimpei Sakurada) commented that:"While we did not play a high-tempo game we normally associated with, we maintained the possessive style of play till the end of the day.

"Hougang is a very good team and to able to beat them under such circumstances also meant my team are mentally strong as well, as they are a fast and aggressive side." opined coach Sugiyama on his fellow finalists.

"At the same time, I would like to thank the whosoever is involved with the club for the victory tonight and with that we will now channel our attention in the S.League title race,  as well as the Singapore Cup."

"With this win tonight, we are hoping for many moments like this to come after this." said the Japanese coach who made the bold declaration during the pre-season introductory session his aim is to win the league title who was met with with skepticism then.
logged down by Ko Po Hui at 01:29:00