By the first half of the game, the Eagles were already 7-0 up against the amateur outfit from the other side of the Causeway.

With a comfortable margin, Geylang altered much of their original first XI in the second half to wrap the game with six more goals with two from a trialist known as "Mikey" (Mihailo Dutina - pictured above "floating in the air") with the visitors pulled one consolation along the process. 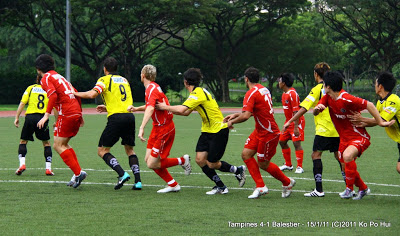 "I felt it was a better performance in the second half, as compared to the poor first half which I think was terrible."

"At least, in the second half we saw some movements and passing of the ball kind of play, which I want my team to play" added the former Gombak Utd coach.

"It's just the pre-season for us to have a game after a week of hard training and this match allowed us to get some warm up, trying out different formations and tactics" said Tampines's (yellow jersey outfit)coach Steven Tan after the match. 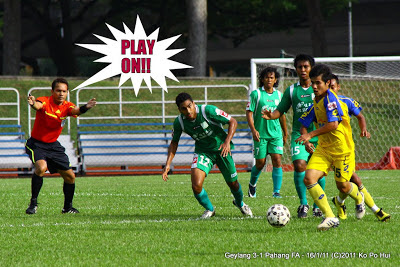 This friendly was made possible with the help of regional legends with the likes of Fandi Ahmad with his Pahang buddies - Dollah Salleh and Zainal Abidin Hassan.

The Eagles were 3-0 up in the first half, before the Malaysians pulled on...e back through the spot-kick in the second half.

The goal scorers of Geylang were the trialists of the club - Joel Wood (2) and Aleksandar Sandro Beric. 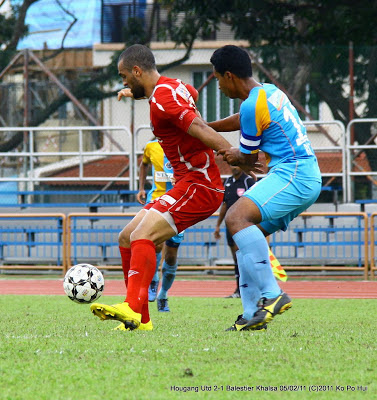 HOUGANG UNITED 2-1 BALESTIER KHALSA on 5th Feb 2011
Brazilian targetman Vitor Borges (pictured above on the left shielding the ball away from Cheetahs' skipper Ratna Suffian) re-signed for the Tigers to complete Balestier's import quota, unfortunately, his strike in the second half was not good enough but to see his team fallen to their hosts, Hougang United at Hougang Stadium on the third day of the Lunar New Year.

PHOTOS FROM THESE MATCHES, PLEASE CLICK HERE TO VIEW...

Email ThisBlogThis!Share to TwitterShare to FacebookShare to Pinterest
Classifed as: Friendly, S.League