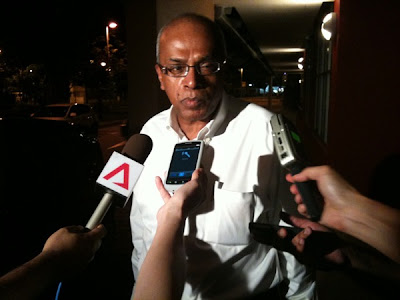 Mr K Balachandra (pictured above) talks to the media after the hearing outside Jalan Besar Stadium.
It was a long, lengthy wait as expected, as the main media outlets and the concerned parties descended at the Jalan Besar Stadium for the Disciplinary Committee (DC) hearing for the mass-brawl that took place between Young Lions and Beijing Guoan Talents on the 7th September.

The DC panel is a independent body from the FAS and they are formed by
a group of lawyers who presided over the hearing.

After five hours of hearing, the chairman of the DC, Mr K Balachandra
emerged and revealed that total 16 players from both sides are being
charged (ten from Beijing, six from Young Lions).

Mr Balachandra added the hearing will be continued at 6.30pm later of
the day, with verdict likely to be issued following the session
logged down by Ko Po Hui at 00:35:00