Luncheon at "Carousel" with Young Lions and Beijing Guoan Talent 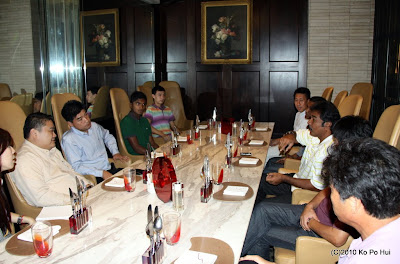 Representatives from Young Lions and Beijing Guoan Talent FC met at "Carousel" at Royal Plaza of Scotts for a luncheon for the first time since the mass brawl that took place on the 7th of September at the Jalan Besar Stadium.

This luncheon session allowed both parties to make their stand on the unpleasant incident that caused quite a stir in both Singapore and China with both Young Lions and Beijing Guoan Talent reiterated that tough disciplinary actions will be shown to those perpetrators.

At the meantime, representatives from the two teams expressed their sincere regret and apology to the fans and public, while pleading for forgiveness for those involved in the mass brawl. 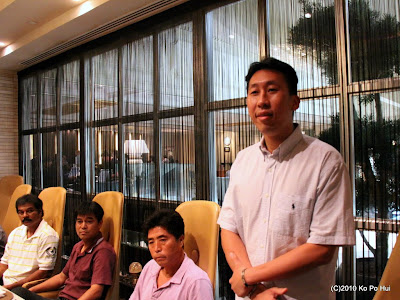 Mr Eugene Loo, the team manager of the Young Lions (pictured above, on extreme right) in his welcome speech thanks their guests for turning up for the luncheon and amid the ongoing Hari Raya celebration, he hopes both sides will forgive each other in the spirit the festival preaches for.

Mr Loo also added the team will fully cooperate with the Disciplinary Committee during the investigation and accept whatever decision the committee undertake. 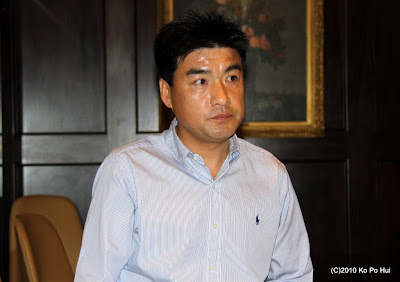 Mr Wei Kexing (pictured above) is the Deputy General Manager of Beijing Guoan Football Club - the parent club of Talent affirmed the club's position in the statement they made earlier and don't rule the possibility of expulsion of any player from the club if found guilty.

Mr Wei also thanks the league authority and the local media for the help and support they had given to his club's feeder side since joining the S.League. 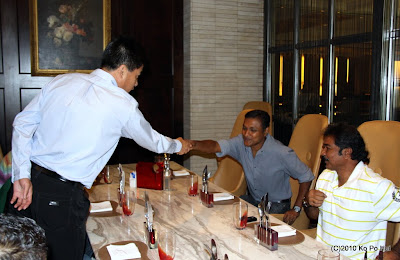 Lastly, he extends his club's invitation to the National U23 team aka The Cubs, who are to be taking part in the November's Asia Games, to their training base for their preparation prior to the meet. 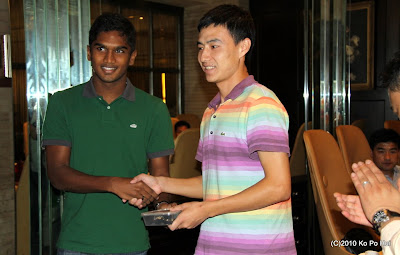 Captains of both sides - Young Lions' Hariss Harun (pictured above, left) present a box of festive goodies to his counterpart Zhang Zhaohui at the end of the luncheon session.
logged down by Ko Po Hui at 15:03:00