(Managed to take a breather while my house's upgrading work still in progress, how could I possibly miss the "Uniform Derby" between SAFFC and Home Utd?) 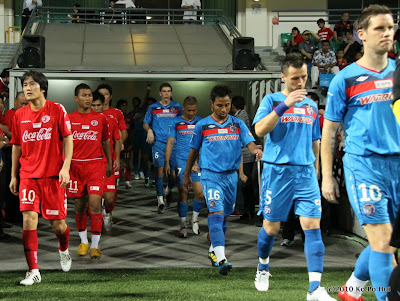 Anyway, it was the first time in months since I last saw the Protectors in action.

Since then things have been improved for the MHA-linked club by offloaded some mis-fitted players in the transfer window, while making some shrew recruitments that totally transformed Home United into a force to be reckon with.

While on the other hand, the long dominant SAFFC are experiencing one of its inconsistent seasons in its recent years, the gallant performance in the ACL seems to be a distant past with coach Richard Bok facing his toughest task to lift the spirit of the Warriors back to its glory.


PICTURES FROM THE MATCH 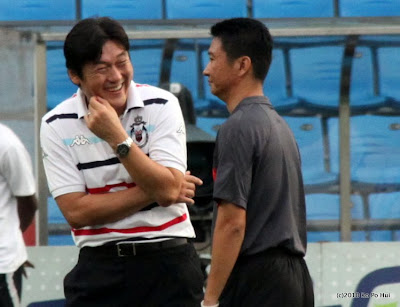 Both coaches - Paul Lee of Home United (left) and Richard Bok having a chatter before the start (wondering what was Lee smiling about...hmmm). 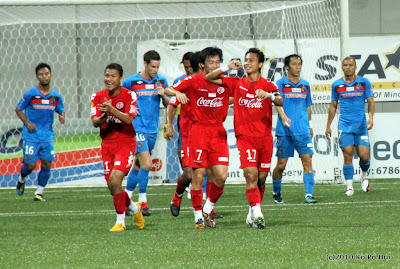 It was a revitalized Home United, as compared to the same squad I saw that was crushed by Beijing Guoan Talents months back on the same ground.

Given its dominance play since the kick-off, it was not surprise to see the Protectors took the lead as early as ninth minute through skipper Shahril Ishak (pictured above no 17). 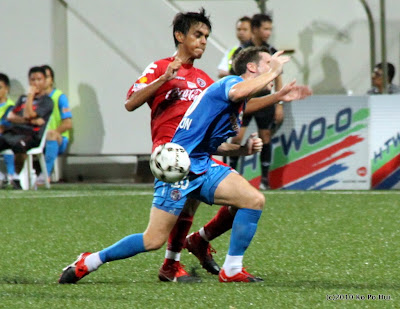 In a match that was supposed to have both sides on the same footing, the defending champions SAFFC found it tough to break through the Home's fortress (as pictured above with John Wikinson being well taken of by the impressive Shahdan Sulaiman). 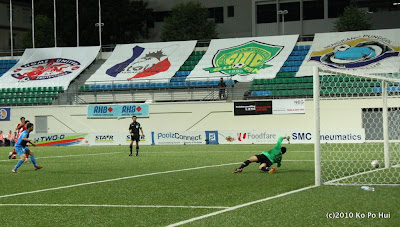 The Warriors were given the lifeline in the 28th minute when they were awarded a penalty, but as you can see from the picture above, former Home star Indra Sahdan Daud placed the ball wide by a grounded Lionel Lewis (who had a minor sore of his right shoulder which is OK afterward). 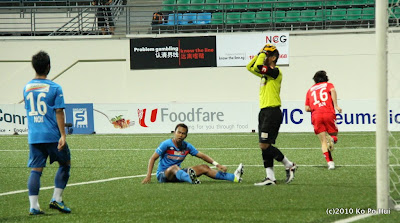 Things took a worse turn for the Warriors immediately after the game was resumed in the second half when Korean import Jun Woo Kuen stabbed home off a ball from skipper Shahril to make it 3-0 in the 46th minute (In my memory, I can't recall when was the last time Warriors were lagging so far behind against their arch-rivals in this derby fixture). 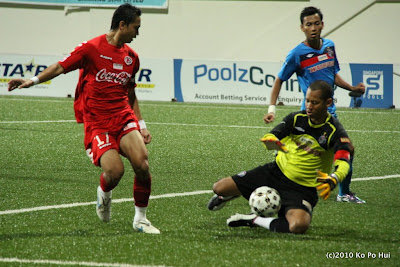 It came at a time when Warriors' custodian Shahril Jantan (pictured above as he gets down to smother the ball against Shahril Ishak) when he earned a recall back to the national setup a day before (tough luck, man...). 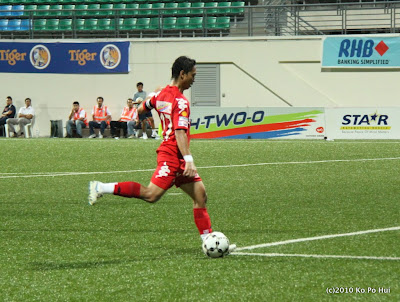 By the time when Shahril Ishak scored his hat-trick (pictured above - think it was his first ever hat-trick in senior level) the first thing that came to my mind was - Could he be a contender for the "Player of the Year" award?

Under the tutelage of coach Lee, the national midfielder's performance to this stage bears the testament that he should be one of those shortlisted. 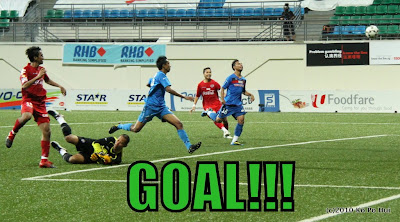 It was all over for the Warriors as they were dealt with another killer blow for the sloppy defending duly punished by the Home United's number 17, who turned the ball in for the surging Shahdan Sulaiman (pictured above left) to drill home the designated away team's fifth goal of the night. 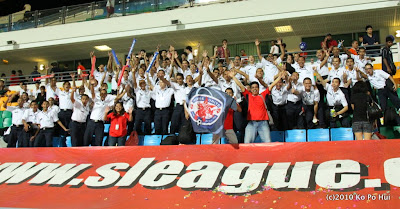 A sweet victory, indeed, for these police cadets who travelled for their Pasir Laba base to spur their team to a truly-deserving victory (pictured above). 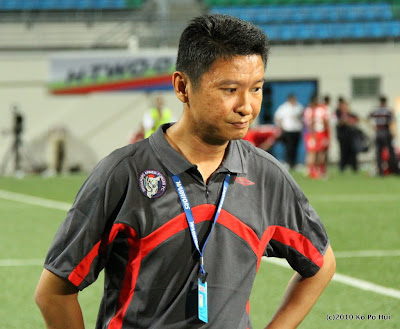 "Richard Bok, you should resign!!" shouted an irate fan after the game from the gallery, as the Warriors coach was getting ready to be TV interviewed (pictured above, wonder if he was aware of that suggestion made, which one fan tweeted "that's just preposterous. For all the glory he has brought them..." agreed, we can't censure him based on this season's performance).

Nonetheless, in the post-match presser coach Bok braved the media by saying the team's aim now is to "finish among the top three in a constantly reviewing process that is on-going throughout the season". 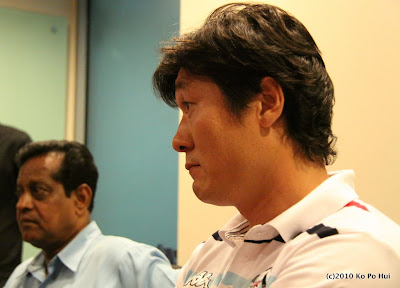 Personally, I felt happy for coach Paul Lee as (above with team manager S Mahalingam on his right) I felt he is vindicated man after a shaky start to the season.

For someone who came to the scene with near zero knowledge of the S.League and the team he was then given charge, his sheer hard work had paid off with the style of football we seen on Friday and the impressive record so far had speak for itself.

Keep it up and all the best, Coach Paul

FOR MORE PICTURES FROM THIS MATCH, PLEASE CLICK ON THIS LINK HERE... THANKS
logged down by Ko Po Hui at 21:42:00