While you were away to the World Cup festival (pictured above - a common sight everywhere in Singapore), some interesting events actually took place during your absence.

Several procrastinating issues were pushed onto the table top after the media probed on matters pertaining the security and the crowd attendance. 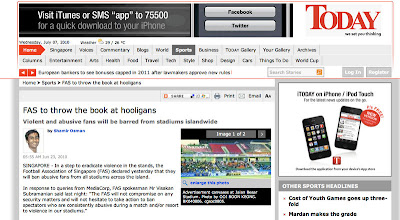 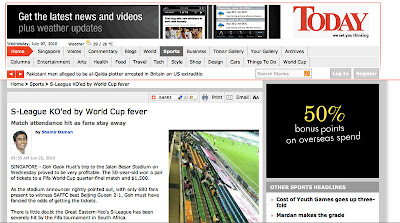 SCREEN-GRAB of the issues probed by the media of late
Matters as such were never openly discussed, and now as they pricked wide open, one can't simply avoid them now.

While they had caught the league authority "off-guard", I do certainly hope they are readily going to address these nagging issues instead of paying "lip-service" to the masses.

On the bright side, though, it was confirmed that the Cubs (National U-23 team) are heading to Guangzhou for the Asian Games in November, following the successful appeal to the SNOC, the decision-making body.

But it was just the beginning of the start, since now all eyes will be the Young Lions, whom being the base of the Cubs to justify their call to represent the nation. 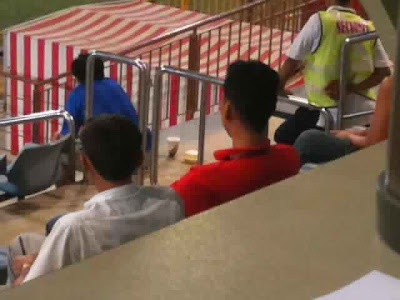 Following a whirlwind trip to Burma, the Young Lions saw themselves succumbed to a 1-0 lost to Beijing Guoan Talents at the Yishun Stadium, under the watchful eyes of national coach Raddy (pictured above left with team manager Eugene Loo on his right).

Citing fatigue as one of the reasons, Young Lions' coach V Sundramoorthy also felt the absence of skipper Hariss Harun (pictured below) was another key factor too. 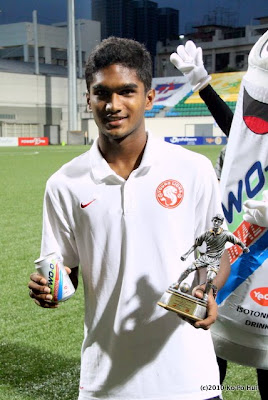 While the young prodigal son of local football set the buzz alight with a long-awaited trial overseas to top CSL side, Shanghai Shenhua, which, however, failed to materialize after the Chinese team's Croatian coach, Miroslav Blazevic "did not get the chance to assess the 19-year-old thoroughly during his stay there". 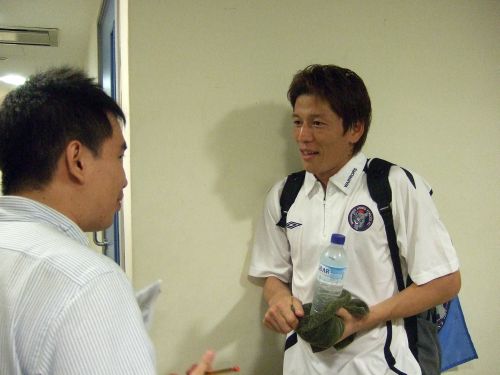 Sengkang's new signing Kenji Arai (pictured right) came as a surprise to many
The transfer window seen some interesting signing with the returning of ex-SAFFC defender Kenji Arai to local football by joining cellar-dwellers Sengkang Punggol.

And still on the Dolphins, are they glad that Ryan Fante (pictured below) is off-loaded after a misery stint at Hougang.

For the time being, Singapore will never be a wonderful destination to Fante (pictured above right)
Whilst, I tried not to be influenced by what I heard and read about the short-comings of the Canadian striker, unfortunately, having seen the hapless Fante in action against the NFA U17 squad had more or less confirmed he did not met the minimum requirement.

Back on the title race, while SAFFC had walloped Woodlands Wellington 4-0 last week, their “auld enemy”- Home United strung up an impressive six straight clean sheet and propelled them up to second place, four points behind leaders Etoile, following their 2-0 win over Gombak United.

Has Home Utd's coach Paul Lee (pictured above right) found the right formula after a shaky start to the campaign?
Before that long, weren't we wondering if Tampines Rovers would be the ONE instead, till their draw with their neighbour Geylang United in the recent derby that ended 0-0.

“S.League title race blown wide open as Etoile lose 1st game after going 12 unbeaten when they went down 1-0 to Albirex.”

Anyway, the World Cup had concluded days ago, it's interesting to see what's in store next for the local season...

Hope to see you back at grounds...