How woeful are the Young Lions? 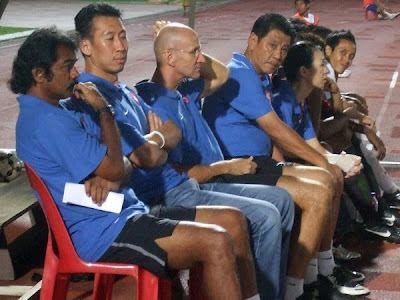 Coach Terry Pathmanathan (first from left) demands improvement from his Young Lions.
While much of the focus been centered on their seniors - the Lions, the current form of this team that are going to be the core of this year's SEA Games football squad is also a major cause of concern.

Until this day, the performance by the Young Lions are far from satisfactory.

Been gathering negative feedback of this team since I last saw them played in their loss against Albirex Niigata weeks ago.

"They can't keep the possession after three passes!" said one.

"These boys are being complacent, just because they think they're the YOUNG LIONS" said another, implying that being part of this team guarantee a spot in coach Raddy's squad for the year end's sporting fiesta.

"We can't expect much from these boys as they're still not up to the mark yet." said coach Terry Pathmanathan after their goal-less draw against Woodlands Wellington.

"They're pushing (themselves) but overnight you can't expect them to turn around to play more decisively." added the former national team captain.

Coach Terry also cited that it's all down to each and individual on how fast they can develop and mature as a player.

When highlighted there's a cause of concern as the squad is going to be the core of the SEA Games squad, coach Terry reasoned, "Let's get real, the S.League is a level higher as compared to the SEA Games."

"And they (Young Lions) are not playing against their own age group, but much experienced, much matured teams."

"So they're now preparing themselves at a higher level, and when playing against the same age group, they're expected to excel themselves on certain levels" he added.

Although the coach nicknamed as "Captain Marvel" in his playing days was frank to admit "Where's our talents?" when told some of the outstanding players the neighbouring teams are churning out for the SEA Games.

However, coach Terry remains defiant despite all the odds, "We don't want to throw in the towel (just yet), as they need to know why they are in the S.League, you get hammer, but you learn the hard way."

"Since the core (of the SEA Games squad) is to come from this team, then they better show us they have done something." he concluded.

Indeed, for those who were at the game at Woodlands were wondering as well as they saw for themselves right in front of all (and coach Raddy) how possession was lost after less than five passes, how the ball was fed to front without any precision, etc.