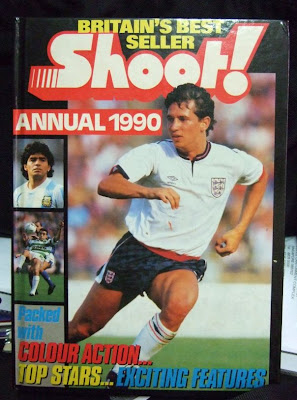 I wasn't aware until I "googled" and "WIKIed" around to know the demise of "SHOOT" magazine.

Quoted from the "wiki" page of SHOOT:

"Shoot's circulation fell from 120,000 copies per week in 1996 to 33,455 in Autumn 2007. [5]. It had changed to a monthly publication in 2000 as it faced massive competition from its long-term rival Match and a series of new titles including FourFourTwo, When Saturday Comes and other failed competitors such as 90 Minutes and Total Football.

I recalled in my younger days (when I was still a Liverpool fanatic), those before the days of the internet with papers and BBC World Service being the instant source for any latest news for English footbal news, "SHOOT" magazine was something like a "dessert after the main course".

There's something you can't avoid - CHANGE and remain INNOVATING at ALL TIMES.

The demise of the "SHOOT" bears the best testament for this fact (see the tag above the word SHOOT - "Britain's BEST seller").

Email ThisBlogThis!Share to TwitterShare to FacebookShare to Pinterest
Classifed as: EPL, media