If they want it, come and have it but they must pay for it...

I read that those guys in London still refused to give up their plan to stage that controversial "39th" game outside England.

Like many parochial-mined football fans, I don't favour this sort of "invasion" as the potential of having a staple of "holiday football" is eminent.

Picture credit: Wikipedia
However, having watched the annual National Day Parade held on the 9th August, at the "Floating Platform" (pictured above), my stand somehow tweaked a bit.

Ok, ok, hold your knives and rotten eggs that are aiming at me.

Tweaked in a sense that I'm NOT accepting the proposal for that "39th" game to be played in this region but how about having a showcase event of top class football action on the platform whenever is convenient? A break from the conventional ambience of playing in a surrounded arena is the point we need to sell in order to entice some of the biggest names in football to play on it.

Now, take a look at the location of the platform.

View Floating Platform in a larger map
Strategically located at the Central Business District (CBD), not only with the Singapore skyline formed as the backdrop of the platform, some of the best hotels and the major retailing establishments are located within a stone throw of it.

So transportation and logistically wise have not things being made easier as teams concerned would be housed in one of hotels around that area?

Being a top money-spinner whenever these top teams turn up in this region, be ready to see hordes of fans from outside Singapore congregate here too. 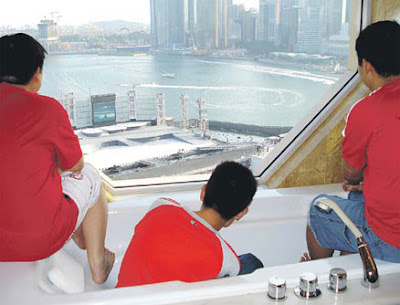 Picture credit :"TODAY"
If these fans can't afford the premium rate charged by the CBD hotels, strings of low-budget accommodations are ready within the walk of any MRT stations, aren't they?

Not only that retailers, entertainment operators might want to cash onto this potential "gold-mine" by having some kind of mega-sale season or side events in line with the tournament.

Whilst I noted that retailers then didn't benefited much when the IOC and WTO delegates were here years back, but they were on working trip, we are talking having fun like the annual Hong Kong 7s !

Local football clubs might want to tap onto chances by playing a game or two of friendlies with these visiting sides and establish any form of working relationship (something concrete rather than having a memorandum signed). 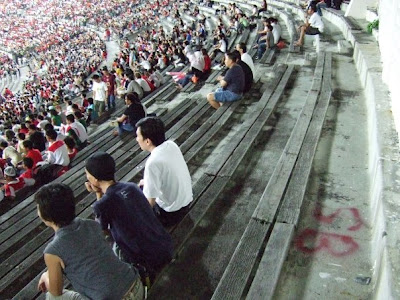 So much so it wouldn't be surprise that ticket to this tournament don't come cheap, but the fact is if more than 30,000 fans don't mind paying $60 to sit on the wooden planks (as pictured above, shot at the "last match" against the Australians LAST year) of Kallang weeks ago when Brazil's Olympics played here, paying slightly more for one of the 27,000 plastic seats is reasonable eh?

It's about generating some tourist dollars to boast the country economy by making this proposed football showcase tournament an annual or bi-annual marquee event in Singapore, like what they want from the upcoming F1 race, isn't it?
logged down by Ko Po Hui at 00:03:00